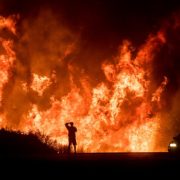 As the temperature increases in spring and summer and plants use up the water stored in the soil, the amount of water held in plants decreases, making them more flammable. Similar to fire wood, the drier it is, the easier it burns. 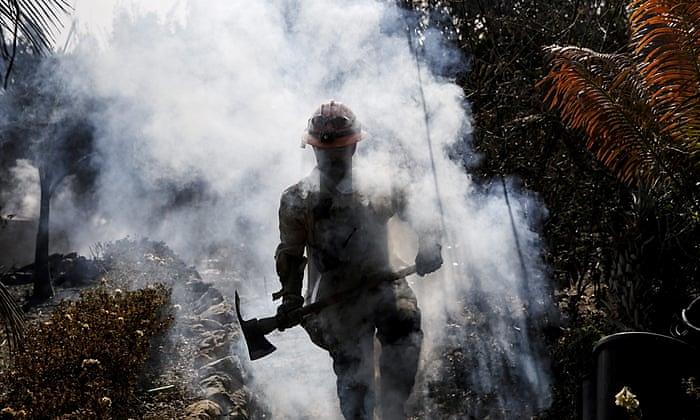 Fire is an integral part of California ecosystems because it consumes dead vegetation, creates space for new plant growth, and helps limit the density of vegetation. It affects almost every vegetated part of the state, from the conifer forests of the Sierra Nevada mountains to the oak woodlands lower down and, in the valleys, the grasslands and chaparral.

Climate change, however,  is causing warmer temperatures, which drys out vegetation beyond historic limits, and climate change is not limited to California, as Hawaii’s on-going transition to this new climate reality already demonstrates. It is also causing winter precipitation to fall over a shorter period and the length of the fire season is increasing. Vegetation in California and elsewhere is increasingly primed for extreme fires.

As the temperature increases in spring and summer and plants use up the water stored in the soil, the amount of water held in plants decreases, making them more flammable. Similar to fire wood, the drier it is, the easier it burns.

In a tweet, Trump blamed “poor forest management” in California for the devastating conflagrations currently burning in the state, and he threatened to withhold federal aid as if in punishment for this negligence, with reason, truth, and facts often missing in the role Trump plays as President.  A climate science denier and former TV reality show host, Trump intentionally fails to see the costs of his environmental and energy polices …to make coal great again, and the connected reality of burning fossil-fuels to climate change, or the larger picture of how this is now playing out in unprecedented fires, droughts, floods, supers storms and other weather extremes not just in the US, but around the globe.

To comprehend what is currently taking place in California, it is important to understand how the state has historically burned, the vast changes now occurring across the landscape, and the role climate change is playing in making matters worse for the state, the region, and the planet.

Putting the current climate-related events into terms of dollars losses, something Trump understands well,  the California fires cost the national economy and taxpayers, according AccuWeather, a projected total economic loss to the state of California due to historic and damaging wildfires that will exceed $400 billion, making the state’s 2018 fires the most expensive natural disaster in the history of the United States. This represents is a huge economic loss or equivalent to 2% of the nation’s GDP, and a total loss of property values, taxes, lost jobs and wages, business losses, and equally important, significant human health impacts and costs from particulate pollution from the resulting from the fires.

Hazy skies were reported in several places on the east coast from smoke wafting from 3,000 miles further west, where wildfires in California have killed more than 80 people and razed more than 15,000 homes and other structures. “Wow. I knew tonight’s sunset over New York City seemed different, and I should’ve realized,” tweeted Kathryn Prociv, a meteorologist on the Today Show. “Wildfire smoke is in the air, all the way from California.”

None of the reported cost factors include environmental costs( e.g. loss of watersheds, soil stabilization, etc.)  from this year’s fires and their costs to society.

IPCC Report A Call to Action