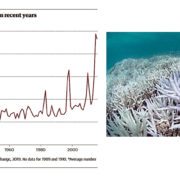 As the days wore on and spring became summer, Hawaii’s air temperatures stayed high, breaking daily records in the 90’s, island-by island, and across the state. Mid-October temperatures continue to set record highs, and the shorter solar days of fall have thus far mostly failed to fully delivery fall’s cooler temperatures — is this the new climate norm?

Hawaii’s higher temperatures are beginning to match what is happening in other climate regions around the world today. Global higher temperatures, a by-product of rising global CO2 emissions, also delivered a devastating blow to Hawaii with a 2015 super-charged coral bleaching event that wiped out nearly 90% of West Hawaii’s coral (comprised primarily of the Pocilloporidae family) and created doubts as to if West Hawaii’s reef would ever recover.

Hopeful signs of some recovery were reported in a West Hawaii Today article last year.  It painted a highly optimistic outlook for coral recovery.  Divers and snorkelers reported sightings of “baby” coral sprouting up within areas of Hawaii Island’s reef system.

This spring, Hawaii’s waters resumed their seasonal heating.  This fall, preliminary observations of last year’s reported coral recovery were being replaced by an acknowledgement that “there are further signs of bleaching and coral death”, with the statements of a coral recovery now silent. 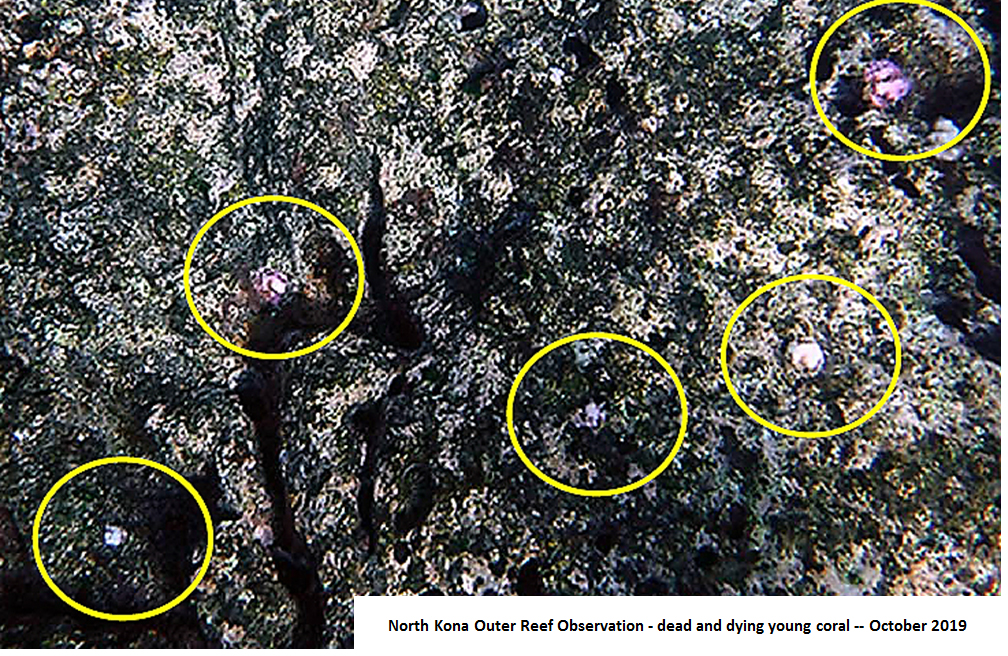 How are our local reefs fairing in these new higher temperature norms?

What has and is being observed in our local ocean are random and limited areas of new coral growth, once healthy, now being observed as baby coral turning an unnatural bright pink, and other young corals freshly bleach white – a total absence of color.

This fall (2019) researchers observed and recorded in the West the hardy Porites Lobata — the mostly survivable and heat tolerant coral, aka smooth yellow and purple corals, these too now are beginning to show signs of abnormal stress.

These are signs of a dead and dying coral reef — signs of the changes to a local marine environment that is worth more than all Hawaii Island’s west side hotels.

All these trends will continue through the end of the century, the IPCC (UN) reported.  For more than the past 150 years, and since the industrial revolution, concentrations of carbon dioxide (CO2) in the atmosphere have increased in sync with a growing global energy dependency on burning of fossil fuels.  Translated, we humans created a climate heating problem for local and global fisheries and marine ecosystems, and we are ignoring the opportunities to course-correct at our own peril.

The ocean absorbs about 30 percent of all CO2 released into the atmosphere, and as levels of atmospheric CO2 increase so does the water level of the ocean.  With oceans absorbing about 22 million tonnes of carbon dioxide from the atmosphere a day, seas have already become warmer and 30 per cent more acidic over the past two centuries.

Ocean acidification is affecting the entire world’s oceans, including coastal estuaries and waterways. Many economies are dependent on fish and shellfish and people worldwide rely on food from the ocean as their primary source of protein — NOAA.) Changes in ocean chemistry is affecting the behavior of non-calcifying organisms. Certain fish’s ability to detect predators is decreased in more acidic waters. When these organisms are at risk, the entire food web may also be at risk.

Shell-forming creatures from oysters to types of plankton are increasingly at risk from the changes, which have been called the “evil twin” – acidification combined with  higher temperatures from climate change. Carbonate ions are an important building block of structures such as sea shells and coral skeletons. Decreases in carbonate ions can make building and maintaining shells and other calcium carbonate structures difficult for calcifying organisms such as oysters, clams, sea urchins, shallow water corals, deep sea corals, and calcareous plankton.

The climate crisis now unfolding in the world’s oceans and ice caps with outcomes is something we humans are only beginning to understand; e.g., melting permafrost venting massive amounts of methane, the acidification of ocean water, dwindling marine life at all levels, and last, but certainly not least, water temperatures on the rise are generating more intense storms with more costly storm surge impacts.  These rapidly developing cause and effect impacts no longer afford us all the luxury to deny, ignore, or forestall meaningful and needed corrective actions.

Hawaii we will find itself staring down a Cat 5 Hurricane in the not too distant future, and we are presently ill prepared for the consequences. But far worse is the need for urgent action to address the source-problem, significantly reducing and then eliminating global fossil fuel emissions (here, there, and everywhere).

A 2019 report from the Intergovernmental Panel on Climate Change (IPCC and its 193 member nations) concluded that “all people on Earth depend directly or indirectly on the ocean” (a fact we are most familiar with here in Hawaii), and that ice caps and glaciers regulate the climate and provide water and oxygen.

The IPCC report also finds unprecedented and dangerous changes being driven by global warming (heating), with sea level rise and coral bleaching at the top of the cause and effect list.

In fact sea level rise is no longer relegated to a future prediction but is now happening. The sea level around Hilo Bay, Hawaii, has risen by 10 inches since 1950. Its speed of rise has accelerated over the last ten years and it’s now rising by about 1 inch every 4 years… (sea level is measured every 6 minutes using equipment like satellites, floating buoys off the coast, and tidal gauges to accurately measure the local sea level as it accelerates and changes).

Extreme sea level events that used to occur once a century will strike every year on many coasts within the next 20-30 years, no matter whether climate heating (fossil fuel) emissions are curbed or not, according the world’s scientists. We are now on the track of mitigation and preparedness, and not the full reversal of the global warming impacts already in the pipeline. 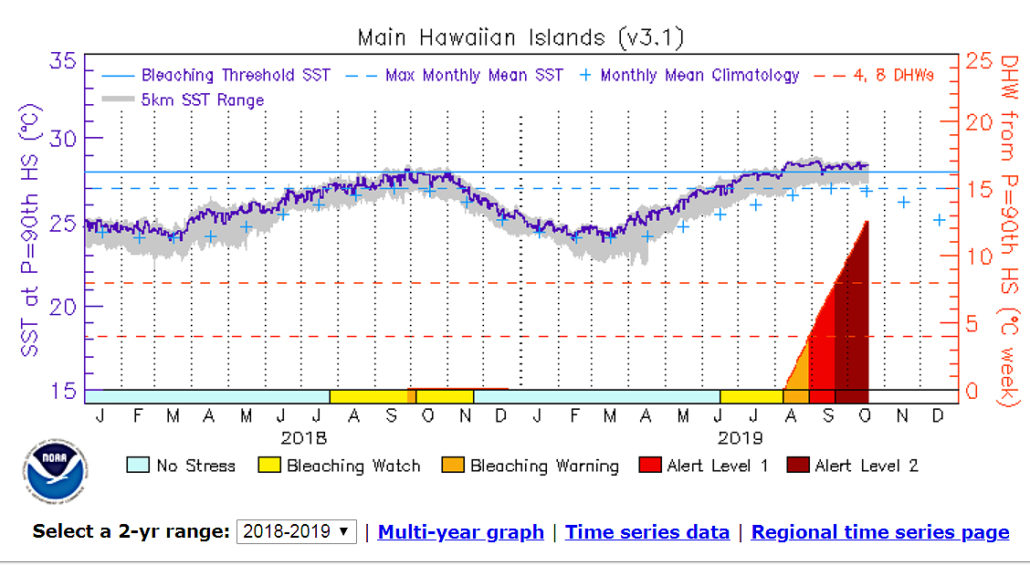 A general scientific consensus concludes: “The current biological annihilation obviously will have serious ecological, economic and social consequences. Humanity will eventually pay a very high price for the decimation of the only assemblage of life that we know of in the universe.”

The IPCC climate data on sea level rise, projects a worst case scenario of more than 13 feet (4 meters)rise.  An outcome that would redraw the map of the world and harm billions of people and our island state residents, economy, and environment which are now in the cross-hairs of an emerging climate crisis.

Far worse than these state-wide signs of warming impacts, would be to ignore, deny, or just talk story empty political platitudes.   All of the world’s scientific validation and warnings are useless if we fail to act meaningfully, and fail to effectively address what scientists are calling our current path to the “sixth global extinction”.

FOR LAND USE THAT COULD TURN THE CLIMATE TIDE

“Land provides the principal basis for human livelihoods and well-being, including the supply of food, freshwater and multiple other ecosystem services, as well as biodiversity.”

Politics Trump Truth: 45 problems, and he’s every one