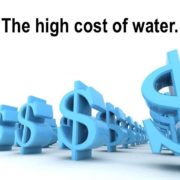 Electric utilities face many challenges today. Hawaii Electric, and utility operating unit Hawai’i Island (HELCO) continue their primary fuel source reliance on unsustainable fossil fuels to produce power for their grid customers, and Hawai’i Island’s water utility, DWS is HELCO’s number one customer and largest power consumer. But as renewable and distributed power generation sources like solar and wind come online, former residential and business power consumers become clean power producers with multiple benefits to society – and by extension to HELCO.  The choice between imported, dirty power versus locally produce zero emissions clean power is obvious to everyone, except those with a vested interest in the status quo. Utilities with little accountability to energy costs (which are passed onto customers) have little incentive for advancing clean energy options and the social, economic, and environmental benefits they yield.

First and foremost, the reduction and dependence on imported fossil fuels in Hawaii is a shared goal by both utilities and consumers alike.

A primary societal benefit in which Hawaii’s economy has benefited from the current statewide transition to a clean energy economy is high paying jobs in the solar and wind energy sectors. Hawaii’s energy future is increasingly tied to the growth and harvesting of local, renewable, clean energy sources. Another is the reduction and eventual elimination of harmful emissions derived from diesel-powered electricity generation plants used today by HELCO and its parent HECO.

At the same time, electric utilities like HECO/HELCO are being forced to adopt a different business model: one that transitions from power generation provider to one of grid manager of an increasingly customer generated power grid made up of distributed clean power sources and from a legacy of utility-controlled centralized grid operations. Before that day arrives, electric utilities must first address an increasing power management problem that includes load balancing between customer power generation and demand. Rolling back the clock on renewable (fossil fuel replacement) with clean power generation opportunities is no longer economically or politically possible for utilities.

In a related development, Hawaii is facing its own form of climate extremes resulting from increasing warming planet. Like California, Hawaii County has within recent years faced its own drought cycles and changes to predicted rain fall patterns, both effecting water supplies and water reserves. Two undeniable and colliding factors are now at play in Hawaii County that link that water and power will be managed in the future.

For electric utilities (HECO/HELCO), the opportunity and challenge in addressing load balancing concerns is storage. For Hawaii’s DWS storage of another kind is also a concern as an increasingly unpredictable climate impact supply and demand for water. For both utilities, cost of operation is always a factor to be improved upon:

More than 50 percent of each HELCO consumer’s electricity bill is made up of fuel costs. Hawaii County Department of Water Supply (DWS), largest single factor in its cost of delivering water services to Hawaii is the cost of electricity, not water. Sixty-six per cent (66%) or nearly two-thirds of DWS’s revenue collected are allocated to pay for electricity supplied by Hawaii Electric Light Co. in support of delivering water to its customers.

Both of Hawaii Island’s utilities will have to change the way they do business if costs are to come down and sustainable operating practices are to be implemented. The opportunity for collaboration between water and power utilities has never been greater.