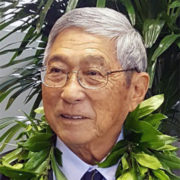 On June 22nd, 2016 the West Hawai’i Forum series presented a 13 candidate face off for the job of Mayor of Hawai’i County.  The two hour forum crowded into the exchange of candidate positions County problems ranging from homelessness to taxes. The forum proved to yield an informative exchange of candidate views and visions for the County. Some candidate insights and ideas on the future direction for Community government were inventive, but most candidate plans to fix problems were similar in nature and vision.  The one comment that came back to later haunt then candidate Kim was his pledge to NOT to raise taxes, if elected.  A pledge he repeated several times during the forum.

Less than two months later (August 13th) the 2016 primary election was held. As important as the chief executive job for Hawai’i County is, a record low voter turn out in the primary and for the race of Hawai’i County mayor produced a winner without a mandate.   In a crowded field of 13 mayoral candidates, now Mayor Harry Kim won with 51% margin over his nearest rival, but with less than 15% of the County’s registered voters placing their ballot check mark next to Kim’s name. Hawaii’s election rules ensured Kim’s primary win was final.