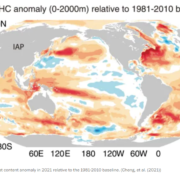 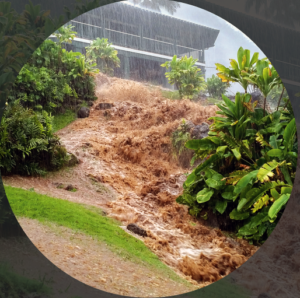 Hawaii’s remote location can no longer be considered to be a safe distance from what are now global climate change impacts.

Hawaii is facing climate changes ranging from subtle forms of increasing air and water temperatures to changes in traditional weather patterns, accompanied by the arrival of extreme weather events occurring with greater frequency and force.

Sea level rise and droughts are a fact of life residents of Hawaii now face, but such subtle changes too often fail to gain the general public’s attention. That said, there is nothing like an outsized storm to focus the public’s attention on changes now affecting historic and local weather norms.

The short scientific explanation of this climate-driven cause and weather effects: As average temperatures at the Earth’s surface rise, more evaporation occurs, which, in turn, increases overall precipitation.

A recent trip to Kauai was a reminder how global climate changes are driving local weather changes. The conditions were serene on Kauaʻi the afternoon of Dec. 17th, 2022, but that all changed by nightfall with the arrival of an unprecedented powerful cold front which moved across the entire island chain resulting in flooding and destruction to property and infrastructure. Roads and bridges at times were near impassable, and the island’s rural infrastructure did not fair well to the extreme weather. The airport was closed for a time with planes grounded, as word spread of a Hawaiian Air flight inbound from Phoenix encountering air turbulence so extreme that a number or passengers were hospitalized on arrival in Honolulu. 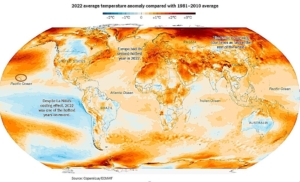 The atmospheric bedlam that erupted over eastern Oʻahu around sunset that same day was followed a few hours later with over five inches a hour of rain dumped onto Hawaiʻi Kai, which came pouring out of water-laden clouds accompanied by crashes with thunder and lightning.  The same cold front produced downpours across the rest of the state, engorging waterways, flooding roads,  and raising water in many streams by several feet in less than a hour.

By midnight, the thunderstorms and intense rainfall which followed, continued to whipped up torrents rain overall the islands and lower elevations. The Big Island leeward side did not escape the cold front which arrived with a non-stop cacophony of heavy rain, wind, thunder and lightning lasting most of Sunday night.

This was no normal storm, in fact it was a series of storms connected and driven by a massive cold front uncommon to the mid-Pacific region.

It was in fact the effect of a climate now in the process of global change — courtesy of our fossil-fuel emissions and legacy energy dependences.

The US endured a particularly painful year as communities wrestled with the growing impacts of the climate crisis, with 18 major disasters wreaking havoc across the country as planet-heating emissions continued to climb.

Storms, floods, wildfires and droughts caused a total of $165bn in damages in the US last year, $10bn more than the 2021 total and the third most costly year since records of major losses began in 1980.

Last year was “part of a trend of hyperactive disaster years across the US”, said Adam Smith, an applied climatologist at the National Oceanic and Atmospheric Administration (Noaa), which released the data. Since 2016, there have been 122 separate billion-dollar weather and climate events that have, in total, killed more than 5,000 people and caused more than $1tn in damages.   “We are seeing several trends of climate-enhanced disasters,” said Smith, noting that the US is seeing longer, more intense wildfire seasons, severe rainfall events and the sort of huge, category four and five hurricanes in the past few years that Noaa has not documented before in its historical record, which stretches back to 1851. 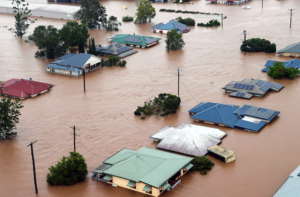 Relentless drought in California followed by rivers of rain,  extreme rainfall in the UK, record heat in China – some of the most severe weather events that have occurred around the world in the past few years were made far more likely due to the climate crisis, new research has found.

The analysis of extreme events in 2021 and 2022 found that many of these extremes were worsened by global heating, and in some cases would have been almost impossible in terms of their severity if humans had not altered the climate through the burning of fossil fuels.

“The extreme nature of these events is very alarming,” said Stephanie Herring, a climate scientist at the US National Oceanic and Atmospheric Administration (NOAA).

“We need to understand if these events are signs that things are getting hotter faster than we had expected. We know extreme heat is going to get worse, and additional research will help us better quantify future change.”

The fingerprint of climate change is being identified across the planet. The risk of extreme drought across California and Nevada was made six times worse by the climate crisis and a strong periodical La Niña climate event from October 2020 to September 2021, while, conversely, extreme rainfall that deluged parts of the UK in May 2021 was 1.5 times more likely due to global heating.

The world remained firmly in warming’s grip last year, with extreme summer temperatures in Europe, China and elsewhere contributing to 2022 being the fifth-hottest year on record, European climate researchers said on Tuesday.

The eight warmest years on record have now occurred since 2014, the scientists, from the European Union’s Copernicus Climate Change Service, reported, and 2016 remains the hottest year ever. 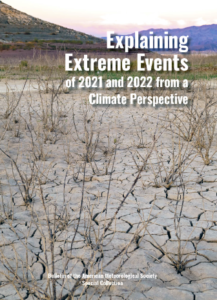 The Nexus of Climate meets Weather

The American Metrological Society (AMS) annual climate report; “Explaining Extreme Events in 2021 and 2022 from a Climate Perspective” offers a plainly written recent as to cause-and-effect climate impacts and assessments of how human-caused climate change may have affected the strength and likelihood of individual extreme events.

This was the eleventh edition of the report, offering a peer-reviewed analyses of extreme weather and climate across the world during the previous two calendar years. It features the research of scientists from across the globe looking at both historical observations and model simulations to determine whether and by how much climate change may have influenced particular extreme events.

The world’s oceans were the hottest ever recorded in 2022 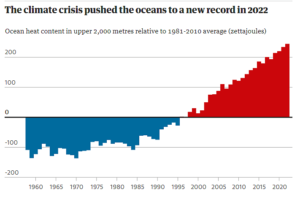 More than 90% of the excess heat trapped by greenhouse gas emissions is absorbed in the oceans. The records, starting in 1958, show an inexorable rise in ocean temperature, with an acceleration in warming after 1990, demonstrating the profound and pervasive changes that human-caused emissions have made to the planet’s climate..

The compendium of research, presented by NOAA at a conference on Monday, draws together some of the latest examples of climate attribution, where scientists have managed to pinpoint the influence of human-induced climate change upon individual weather events and disasters.

Previously, scientists were very reluctant to talk about the climate change influence upon discrete events, preferring a more general probabilistic framing, but that this messaging has “evolved over time as the research has increased” into more exact attribution methods.

Using increasingly powerful climate models, along with historical observations, scientists are now able to provide more a precise, and rapid, assessment of the influence of the climate crisis on certain disasters. The heavy rain that caused devastating floods in Nigeria, Niger and Chad last year, for example, was made about 80 times more likely by the climate crisis, one study has found.

Herring warned that many of the temperatures now being seen are well beyond any modern historical norms and are pushing humanity into a new, dangerous state. A heatwave in South Korea in October 2021, for example, was so drastic, at almost 7F higher than normal, that it would be considered an event that would only happen every 6,250 years. But the climate models predict that this will become the new normal for South Korea by 2060 if planet-heating gases are not radically cut.

The same fate is well on its way to impacting temperature and weather norms across the Pacific region.