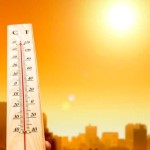 July was world’s hottest month ever recorded, US scientists confirm

Global land and ocean surface temperature last month was 0.9C hotter than 20th-century average, beating July 2016 record.  July was the world’s hottest month ever recorded, US government scientists have confirmed, a further indication of the unfolding climate crisis that is now affecting almost every part of the planet.

Confirmation of the record July heat follows the release of a landmark Intergovernmental Panel on Climate Change (IPCC) report on Monday which found that humans’ burning of fossil fuels has “unequivocally” heated up the planet to temperatures not seen on Earth in around 125,000 years.

This behavior is pushing the world towards dangerous climate breakdown that can only be averted by deep and rapid cuts to greenhouse gas emissions.

Spinrad said that IPCC report “confirms the impacts are widespread and rapidly intensifying.”

The unequivocal consensus of the world’s top climate scientists—unveiled in a landmark report Monday—is that not only are humans responsible for the catastrophes befalling the atmosphere, the oceans, the ice packs and the forests, but that without drastic moves by the planet’s leaders to eliminate greenhouse gas pollution, things are going to get a lot worse, and quite soon.

The assessment from the UN’s Intergovernmental Panel on Climate Change that the crucial warming threshold of 2°C will be “exceeded during the 21st century” makes the Paris climate accord, its warnings and goals seem like sunny optimism by comparison.

Other findings? The past decade was most likely hotter than any period in the last 125,000 years (when sea levels were up to 10 meters higher) and combustion and deforestation have raised CO2 in the atmosphere higher than it’s been in two million years. “This report,” Guterres warned the world, “must sound a death knell for coal and fossil fuels before they destroy our planet.” 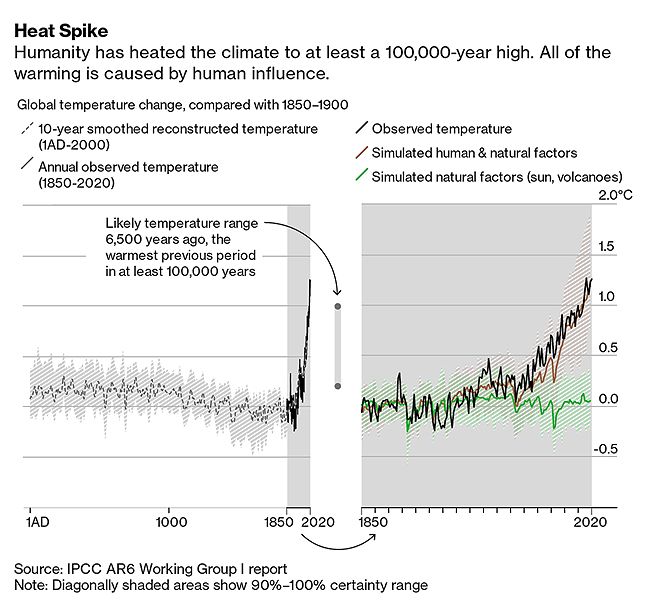 Not only that but atmospheric CO₂ is now at a two million-year peak. Consuming fossil fuels has combined with agriculture to push methane and nitrous oxide—also greenhouse gases—to records for at least the last 800,000 years.

All the greenhouse gases have elevated the global average temperature by about 1.1° Celsius above the late 19th century average. In fact, humans have already dumped enough greenhouse gas into the atmosphere to heat up the planet by 1.5°C—one of the goals set by the Paris Agreement—but fine-particle pollution from fossil fuels is masking it by providing a cooling effect — a twisted logic of pollute the planet to save the planet.

For man-made climate change deniers, the scientific findings confirmed what many people already knew, that is that the combined contribution to global warming by so-called natural factors, such as the sun and volcanoes, is now estimated to be close-to-zero in raising the planet’s temperature.

This hasn’t always been the case. A recently as 20 years ago, for instance, it was virtually impossible to attribute any particular storm or temperature spike to the warming world. But the climate science profession has seen entire specialties emerge and mature since the IPCC’s previous mega-report in 2013.

No field is more resonant than the ability to analyze extreme weather events in real-time to determine what role climate change is playing. The deadly heat wave that gripped the western coast of North America in June had detectable evidence of human responsibility—and that determination came quickly. World Weather Attribution, an international research group, needed just days after the heat broke to conclude that the extraordinary temperatures would be “virtually impossible” without climate change.

This one is a milestone in the field of climate sensitivity that’s taken four decades. Drawing from research on ancient climates, as well as advanced satellite technology that monitors clouds and emissions, new models have narrowed the projections of the atmosphere’s likely response to industrial emissions. That allowed the IPCC authors to focus their temperature projections for the rest of the century, giving humanity a clearer picture of what may lie in store if we don’t act quickly to curtail emissions.

The Earth’s response to a theoretical doubling of preindustrial CO₂ levels is now thought to be between 2.5°C to 4°C—a much smaller range than 1.5°C to 4.5°C in previous IPCC reports. These findings rule out the possibility that unrestricted emissions will have only a mild effect on global temperatures, a hope very few observers of events in recent months could cling to. But the narrower range also provides powerful evidence of the world’s best pathway to safety: swiftly ending the release of carbon dioxide and other greenhouse gases.

Almost as soon as emissions cease, heating will cease and temperatures will stabilize in a couple of decades. But some effects—such as sea-level rise—will remain irreversible for centuries. It’s a race between the avoidable and unavoidable, and humanity is behind.

Scientists broke new ground in this IPCC report by projecting what happens when our emissions get to zero. As the world reduces its use of fossil fuels, for instance, the cooling effect of aerosols will start to decline. The scientists are confident that one way to counter that decline would be to pursue “strong, rapid and sustained reductions” in methane emissions. Beyond CO₂, methane, and nitrous oxide, there are four other greenhouse gases that also provide opportunities to slow warming.

Sometimes it’s a fight. But unanimous agreement among the nations of the world, who all must affirm that the findings are summarized accurately, is a very powerful tool. It’s what makes the IPCC the most authoritative body on global warming.

The new report begins with a definitive statement:

“It is unequivocal that human influence has warmed the atmosphere, ocean and land.” Tom Evans, climate researcher at the think tank E3G, put the implication succinctly: “No government has any excuse to duck their responsibility to act.”

“Unless there are immediate, rapid and large-scale reductions in greenhouse gas emissions, limiting warming to close to 1.5°C or even 2°C (the make or break point of no return for humanity) will be beyond reach.”

The good news is that it is not too late, and if we collectively wake up and take action now.

Yes, it’s tempting to think that the problem is too large for you personally to even try to solve it. But here too, there is good news: in this moment of crisis we find ourselves in, going it alone is not what’s required of us. The key to turning despair into action is to think beyond the individual and seek community support and solutions. something we do well here in Hawaii.

— especially those that put pressure on governments and companies to make the large-scale changes that are necessary to truly curtail emissions. Or as Mary Annaïse Heglar puts it, “the most detrimental thing to climate action is this feeling that we’re all in it alone.”

What’s in the bipartisan infrastructure bill for Hawaii

Is Hawaii (and are we) making a difference in addressing Climate Change?

Pandemic Update, Hawaii and the World
Scroll to top