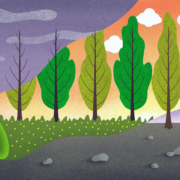 As BeyondKona reported earlier in “A Titan Battle: Oil versus Climate” words and actions matter in the battle to address climate change.

Clearly, to win this epic battle and to save the planet humanity requires more than just public participation, e.g., adding solar to rooftops and driving electric vehicles. The producers and consumers of this fossil fuel energy play have a role and responsibility in determining the future and outcome of life on this planet.

In what can only be described as a battle of epic proportions began with corporate and political denial, but has since been replaced by overwhelming scientific proof and a removal of decades of doubt and denial. The cause and effect role humans play in creating and piling-on global warming emissions is now well established, as are the increasing consequences.

Climate change is perhaps the most disruptive change to Earth since humans arrived on the scene.

Solutions to the magnitude of the problem have been blocked or delayed by a global economy based on obsolete fossil fuels. Corporate Greenwashing is just one more element in this battle.  Change is hard, very hard, and for those invested in the past ignoring both the present and future consequences of global warming are especially difficult to accept or change.

Greenwashing is an effective propaganda tool designed to slow energy and climate reforms. It’s expressing an intention or action and doing the opposite. It is baked into the climate battle between those who are chiefly responsible for creating the problem, and the public which shares in that responsibility as consumers of fuels unsettling Earth’s delicate climate balance.   It’s comforting being told …“don’t worry, be happy”, but when reality sets in it spoils the party. 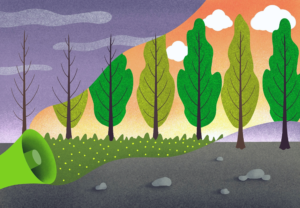 First things first: What do companies mean by net zero?

But, for now, compensating for emissions is often a gamble. Forests that form the basis for carbon offsets are complicated because those forests can burn, releasing their stored carbon into the air and defeating the idea of an offset; exactly what the controversial biomass power plant Hu Honua would do if it became operational on Hawaii Island; destroying local forests and burning those trees for power generation.

Most of the technologies designed to remove carbon that’s already in the atmosphere are prohibitively expensive and not in use on any commercial scale.

A government, business or individual can attempt to balance their own emissions by finding other ways to remove an equivalent amount of greenhouse gases from the atmosphere. The process is called carbon offsetting.

David Barmes, senior economist at the campaign group Positive Money, says offsetting is the most popular form of greenwashing.  “It’s riddled with fraud and allows firms to claim they’re meeting emissions targets while they continuously pump emissions into the air.” He adds: “The whole point of offsets is to allow these corporations to keep emitting with impunity and allow governments to claim they are meeting targets.”

Altogether, these uncertainties mean carbon offsets should be marginal in corporate plans, according to the standards set by Science Based Targets (a nonprofit group that assesses corporate goals). Carbon off-sets are a key component in the majority of corporate emissions mitigation plans. A true audit would reveal most companies will only be able to rely on these tools to offset 10 percent of their emissions.

Some companies, like the ones in the fossil fuel sector and cement production plants, will need to radically change the core of their business models. There is no workaround.

Carbon reduction pledges – what are companies doing between now and 2050?

Most pledges have 2050 as their target date. That’s because of the scientific consensus that, if the world can stop adding carbon dioxide to the atmosphere by then, we should be able to hold warming to 1.5 degrees Celsius. Beyond that level, the dangers of global warming — including worsening floods, droughts, wildfires and ecosystem collapse — grow considerably.

But it’s a long way to 2050. Experts say any credible pledge should have short- and medium-term targets, too, for every five or ten years. Pratima Divgi, who heads the capital markets department for CDP North America, said interim targets were useful for many reasons, not just measuring performance. Setting and working through targets transparently is also key for shareholders and civil society to assess progress.

What companies exclude in their GHG emissions targets?

The largest share of emissions tied to a company’s business most likely happen somewhere outside that company. For example, extracting the raw materials needed to manufacture a product. Or, home delivery.

Take JBS, the world’s largest meatpacker. Emissions from their offices and slaughterhouses are only 3 percent of their total emissions, while the other 97% are tied to the thousands of farms that supply them with cattle, according to a recent analysis by the Institute of Agriculture and Trade Policy.

For banks, the difference is even more striking. Emissions from their fossil fuel investments are, on average, 700 times greater than their own.

Another example, emissions tied to supply chains are on average more than 11 times greater than the emissions of a company dependent on those the same supply chains.

Bottom line: Any net-zero company pledge that doesn’t include these emissions directly and indirectly tied to their operations or investments is not credible.

When a company’s emissions balance sheet checks out, is that enough?   Not necessarily. Its impact on our planet’s climate can go well beyond its business, into the complex realm of politics.  It’s not uncommon for companies making bold announcements, while in the background lobbying against climate action impacting their business.

A Titan Battle: Oil versus Climate