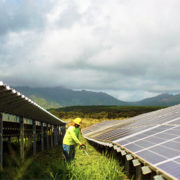 Hawaii, A Leader in Renewable and Clean Energy, Enacts Law Aligned With Global Paris Climate Accord

HONOLULU — Hawaii has passed a law to document sea level rise and set strategies to reduce greenhouse gas emissions. The bill signed by Gov. David Ige aligns the state’s goals with the Paris climate accord.

Ige said Hawaii is the first state to enact legislation implementing parts of the Paris climate agreement. President Donald Trump announced that the U.S. would withdraw from that accord last week.

“Hawai‘i is committed to environmental stewardship, and we look forward to working with other states to fight global climate change,” Governor Ige said in a statement. “Together, we can directly contribute to the global agenda of achieving a more resilient and sustainable island Earth.”

Governor Ige said the islands are seeing the impacts of climate change first-hand. He says tides are getting higher, biodiversity is shrinking, coral is bleaching and coastlines are eroding.

“The measure adopted relevant sections of the Paris agreement as state law, which gives us legal basis to continue adaptation and mitigation strategies for Hawai‘i, despite the Federal government’s withdrawal from the treaty,” said Hawaii Sen. J. Kalani English.

At least a dozen states, including Hawaii, have signed pledges to continue reducing fossil-fuel emissions despite Trump’s decision.

“As the federal government turns its back on the environment, New York and states across the country are picking up the mantle of climate leadership and showing the world it’s possible to address climate change while also creating good-paying careers,” New York Gov. Andrew M. Cuomo said in a statement earlier this week.

A new era of U.S. climate action has dawned. In less than a week since President Trump announced his intent to withdraw from the landmark Paris Agreement, more than 1,000 U.S. states, cities, businesses, and universities have organized themselves into an unprecedented coalition dedicated to continuing strong U.S. climate leadership. In their “We Are Still In” statement issued yesterday, American governors, mayors, investors, CEOs, and college and university leaders are sending a clear signal that they remain committed to the goals of the Paris Agreement and will press forward regardless. This action opens a new chapter in the history of international collaboration on climate change.