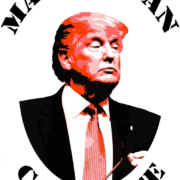 What is the real story of Donald Trump and Russian puppet master Vladimir Putin?  Official and unofficial investigative channels have been mostly blocked.  Effective legal obstruction has ensured the President is firewalled from questions of his conduct while he is protected by the office of the Presidency, but time is winding down for Mr. Trump, and the presidential pardons are ramping up.

The Trump presidency has been marked by four continuous years of public scandal, civil and criminal investigations, impeachment. Yet, President Donald Trump remains the master of manipulation, and the most powerful man in the world to be manipulated.

History will show that the rocky path to impeachment for President Donald Trump was only the tip of the iceberg.  Trump, the one term president, decisively lost the popular vote in two consecutive elections, and equally failed decisively to win his 2020 re-election or talk and tweet his way out of electoral realties – but he is a self-described “winner”.

Perhaps Donald Trump’s greatest accomplishment as President was his exploitations of long standing divisions within the Union, both for personal gain and profit. The latest example was Trump’s highly discredited narrative of election fraud, which as it turns out, has been little more than a fund raising scheme to enrich Trump, sort of a retirement bonus funded by blind faith followers of the pied piper of politics.

Looking back at the Trump administration over the past four years, it is difficult to recap in one article or a single book (and there is a library full of books on the Trump presidency) which offers a clear path to unanswered questions surrounding his scandals, misdeeds, and corruption during his time as president.

In the final days of the Trump presidency, there are (as of this writing) two major mismanaged events which now dominate the American landscape:

After sowing doubt in the democratic system for which he was the chief executive for 4 years, Donald Trump reaped public division on a national scale, disabling public institutions vital to the Republic, and leaving the Country weaker in every category of governmental endeavor.

Trump also prioritized personal loyalty from his agency appointments ahead of qualifications and competency, and also subverted the county’s long standing system of checks and balances, as well as public transparency in government. All the while engaging in endeavors for personal profit ahead of the interests of the United States.

But throughout the Trump presidency there was one common dominator, Russia and Vladimir Putin.

The conservative publication, National review, this month recapped the role of Russian interference in American politics, and if anyone was paying attention, it is easy to connect dots the between the Trump playbook and Russian goals…

“Based on 2016 evidence, Russian attempts to interfere with voter-registration lists and to promote voter fraud cannot be discounted. But in the 2020 presidential election, Putin’s primary aim was neither to hurt Biden, nor to aid Trump. We can ascertain today that his primary goal was to polarize the country, and to sow distrust and social chaos to undermine the confidence of Americans in each other and in their democratic process. A polarized, disunited America will help Putin end American dominance of a unipolar world and re-establish Russia as a global power.”

“While conventional military conflicts between large powers appear to be out of fashion — along with formal declarations of war — Russia has been waging a silent, “hybrid war” against the U.S. for years. Russian President Vladimir Putin’s goal: to influence American minds.”

Since the 2016 elections, America’s intelligence agencies have repeatedly warned about the threats to American elections posed by foreign states such as Russia – ignored and covered up during the Trump years.  A 2017 Intelligence Community Assessment highlighted the efforts of foreign states who try to “shift U.S. policies, increase discord . . . and undermine the American people’s confidence in the democratic process.” In Donald Trump, Vladimir Putin found his Manchurian candidate.

There’s nothing inherently damning about most of the ties illustrated below. But they do reveal the vast and mysteriously complex web of the Trump organization links to Russia, and its oligarch president, Vladimir Putin. Published in 2017 in the publication Politico, the graphs illustrate dozens of links, including meetings between Russian officials and members of Trump’s campaign, and administration; all dating back to Trump’s 2013 visit to Moscow for the Miss Universe pageant, and continuing throughout his presidency. 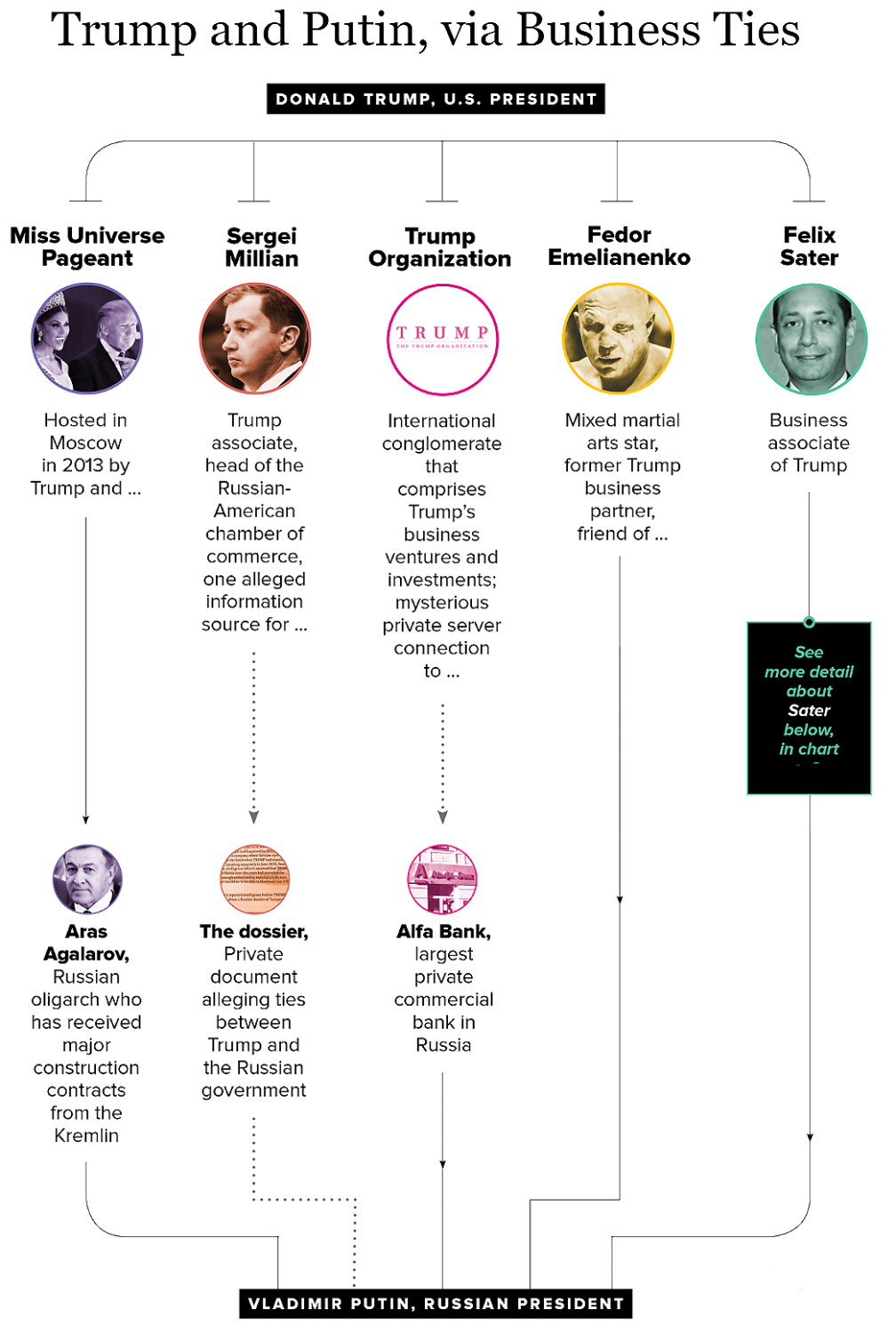 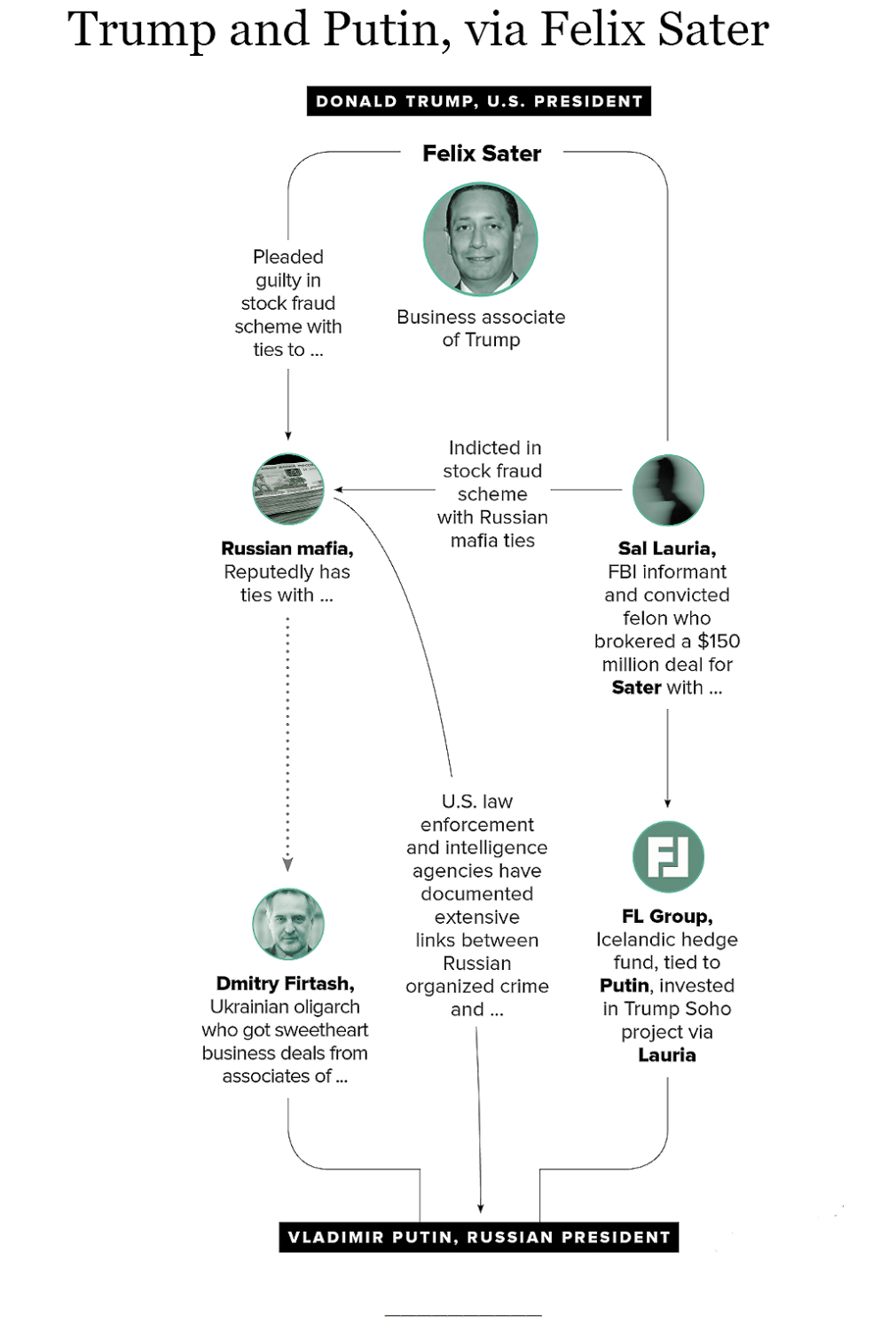