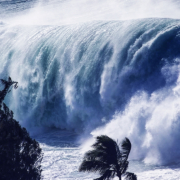 Human-driven climate change has set in motion massive ice losses in Greenland that couldn’t be halted even if the world stopped emitting greenhouse gases today, according to a new study published Monday.

The findings in Nature Climate Change project that it is now inevitable that the Greenland ice sheet will melt — equal to 110 trillion tons of ice, the researchers said. That will trigger nearly a foot of global sea-level rise.

The predictions are more dire than other forecasts, though they use different assumptions. While the study did not specify a time frame for the melting and sea-level rise, the authors suggested much of it can play out between now and the year 2100. 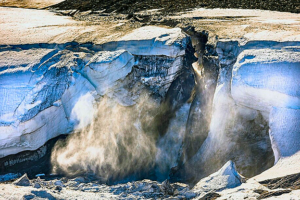 The new research projects a worse outcome than previous sea-level findings; first, by calculating how much ice Greenland must lose as it recalibrates to a warmer climate.

“Every study has bigger numbers than the last. It’s always faster than forecast,” William Colgan, a study co-author who studies the ice sheet from its surface with his colleagues at the Geological Survey of Denmark and Greenland, said in a video interview.

A one-foot rise in global sea levels would have severe consequences. If the sea level along the U.S. coasts rose by an average of 10 to 12 inches by 2050, a recent report from the National Oceanic and Atmospheric Administration found, the most destructive floods would take place five times as often, and moderate floods would become 10 times as frequent, which is particularly bad news for Hawaii’s coastal population centers throughout the island chain.

Last year, the U.N. Intergovernmental Panel on Climate Change reported the total ice loss from Greenland by the end of the century was projected to be round half a foot of sea-level rise from Greenland by the year 2100. That scenario assumed humans would emit a large amount of greenhouse gases for another 80 years, and even with advances with GHG reductions.

The study offers some hope.  Even if more sea-level rise is locked in than previously believed, cutting emissions fast to limit warming close to 1.5 degrees Celsius (2.7 degrees Fahrenheit) would prevent things from getting much worse.

Greenland is the world’s largest island and is covered with a sheet of ice that, if it melted entirely, could raise sea levels by more than 20 feet. That is not in doubt — nor is the fact that in past warm periods in Earth’s history, the ice sheet has been much smaller than it is today. The question has always been how much ice will thaw as temperatures rise — and how fast.