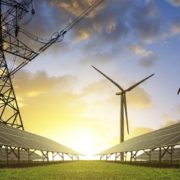 Hawai’i Island is at a crossroads… reactive public policies and misguided private investment are not helping – enough.

Just days after the Intergovernmental Panel on Climate Change (IPCC) released a terrifying report confirming the world (in which Hawai’i is not exempt) must act immediately to avoid catastrophic climate change, Hurricane Michael has slammed into the Florida panhandle, supercharged by overly warm ocean water, and showed us another example of the devastation climate disasters can cause, especially to vulnerable communities.

Ok, you’ve heard it before, but it bears repeating… Hurricanes are becoming stronger, slower and wetter; recent storm events in Hawai’i bears this out.  And yes, the changes to our climate and increase in global temperatures are primarily driven by human-induced demand for fossil fuel energy and the consequences of that demand and energy consumption.  If you still drive a gas or diesel truck, SUV, or car, then you’re burning fossil fuels and part of the problem.  When you shop at the local grocery store, you’re contributing to the problem, when you turn on your lights with power supplied by Hawaii Electric Light Company (HELCO) or take a shower with DWS supplied water, you’re also part of the problem, and life’s list goes on…

Let’s face it, we are all part of the problem, but the time is now, and long overdue, that we all become part of the solution.

HELCO’s decision to buy power, and thus enable, the controversial (yet to be activated) tree destroying and wood-burning Hu Honua power plant, is one example of Hawai’i Island being on the wrong path in its energy transition with state-sanctioned renewable energy options that include wood-burning biomass power plants.   The Hu Honua is the kind of power plant project you would expect to be sited in marginally developed areas of the world with limited power options, not Hawai’i.

A recent name change to Honua Ola (Living Earth) from Hu Honua does not change the reality that this form of so-called renewable energy is a bad example of state and county energy policy, and a poor choice by HELCO to meet its 2045 RPS goals, and completely fails to address the growing state of impacts from power plant emissions that are driving climate change.  This problem example is especially true when HELCO has cost-effective clean and renewable energy options available today.

Renewable energy is often falsely linked to low pollution and low climate change impacts.  The current deficiencies in state’s all-in energy policy designed to transition off fossil fuels allows many types of renewable energy and numerous ways it can be applied.  Some reduce and some raise pollution levels, some have lower and some have higher climate impacts, and some, as is the case with wind and solar are zero emissions (clean) energy options.

For Hu Honua, making electricity is all about cutting down Hawai’i Island’s forests to burn for energy, clogging local and inadequate road systems with a supply-chain of logging trucks, polluting the local air shed and producing waste by-products potentially toxic to Hawaii Island’s earth and water assets, altogether, here is an excellent example of taking Hawai’i in the opposite direction of becoming a self-sufficient and clean energy economy.

While HELCO continues to struggle to meet its 100% RPS goal by 2045, historically picking losers instead of winners to replace its costly and polluting diesel-fired power plants, it bet heavily on the Puna Geothermal Ventures plant, now shuttered thanks to Pele. Their announcement to, for the first time, embrace utility scale solar and battery storage area, is welcome news to Puna area residents who can now breathe easier and sleep at night, if and when they return to this very volcanic-active part of Hawai’i Island.

The historic utility grid model of a centralized power plant with miles and miles of cable and other utility infrastructure running in all directions only to serve customers at the end of those cables – represents the weakest point of failure for utility service reliability, and HELCO’s grid operation is no different.

Without power we are quickly back in the stone age.  Hawai’i Island residents also face another consequence from potential major power outages, one that keep emergency planners up at night: it’s a loss of water supply from the Department of Water Supply (DWS) and to its customers throughout the island.  Since January 2017, DWS has had a jaded reliability record, beginning with a series of still not fully explained well site failures. Only one of the five affected well sites has been restored to service in nearly two years.

A prolonged loss of HELCO-supplied power to DWS, by its own estimates, would result in the department’s ability to only operate and supply water to its customers for no more than 24 hour period.  No power to pumps – no water to customers.  There is no rooftop customer solution to this DWS water dependency, except a better prepared DWS operating with under back-up power in the event of the next major storm and an extended power blackout. One power-independent solution, the Lamamilo Wind Farm, currently serving as a dedicated alternative power supplier to DWS.

Not only are these two new zero-emissions power plants the right choice for Hawaii’s solar rich environment, with the promise to operate at a considerable lower cost to HELCO’s conventional power plants, while providing essential power security (at least their grid connection points) that otherwise would not be possible.   These two solar plants, if approved by the Public Utilities Commission (PUC), will help displace 1.2 million barrels of fossil fuel per year, and hopefully save ratepayers money.

Hawaiian Electric, Maui Electric and Hawai‘i Electric Light (HELCO) already have more than 500 MW of renewable energy under contract, in addition to nearly 80,000 private rooftop systems in operation. The missing element for rooftop solar, by Hawaiian Electric standards, has been the four operating utilities seeming inability to accept clean power generation from their customers. These new clean power solar energy producers are not only solving the problem of Hawaii’s dependence on dirty energy, regardless of its source, but they are assisting HELCO and its sister companies in their state-mandated quest to go all-in with renewable energy by 2045.

If you already have solar panels on your rooftop or apartment building, you will clearly understand what follows…

Ask any solar rooftop homeowner, what is their number one priority for going solar. They may say with some pride, it’s being independent of the utility, saving money, doing the right thing, and/or charging their recently acquired Electric Vehicle (many more EV choices are coming to a dealer near you) with fuel-for-free from the sun.

Whatever their reason, Hawaii’s residents and businesses with rooftop solar, especially in combination with battery back-up, find comfort in knowing they are ready to meet the challenges of an increasingly uncertain power security future, with preparedness, reliability, and power on-demand when the next super storm hits Hawai’i.

Today’s energy decisions that we let others make for us affect our daily lives and have far-reaching consequences to our families, friends, and community.

Our current assumptions about weather, climate, emergency preparedness and sustainability are now in question as fast-moving global and local developments challenge this thinking on which Hawaii’s private and public dollars are spent.

The world’s oceans continue to warm at a fast rate, coupled to coral die-offs, sea-level rise, more hurricanes, and super storms that are becoming the norm.  This is especially important to Hawai’i, an island state, as hurricanes draw their energy from deep below the ocean’s surface – up to depths of 2,000 meters. The temperature at these depths is measured by Ocean Heat Content, a metric that has soared since 1970, driven largely by four of the world’s major oceans. Last year was the hottest on record.

One thing island residents can rely on is the rising cost of daily living.  The role energy plays is central to that cost of living, and the food, water and power security on which we depend. The technology and system costs associated with clean energy choices, such as solar, wind, and battery storage continue to drop.

When Hawai’i considers alternatives to it current fossil fuel energy dependencies, the cost of kilowatt hour (KwH) delivered, a gallon gas-diesel pumped, to Hawaii’s environment on which we all depend, the sum of Hawaii’s energy costs are greater than its parts.