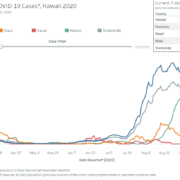 Hawaii still had the sixth-lowest per-capita rate of COVID-19 cases in the country as of Monday.

Call it faith or a belief by our government officials (beginning with Governor Ige), that Hawaii is finally learning the lessons of living and dying with 6 months of highly airborne infectious virus, and is ready to open soon.  It is his belief the state has discovered how to manage a global pandemic – one which came to Hawaii for vacation and decided to stay.

Reopening leisure travel to Hawaii, currently planned for mid-October, Governor Ige said the state was still finalizing details of its pre-arrivals testing plan, slated to begin with Oct. 15 re-opening to tourism. The state’s plan calls for travelers who get tested according to state protocols to bypass a mandatory 14-day self-quarantine for out-of-state passengers that’s been in place since March 26.

Hawaii is the world’s most isolated and populated land mass (island chain). That, by itself, has given many islanders a false sense of security when it came to global pandemic that neither respects boarders or distance.

Hawaii’s so-called quarantine measures have recently demonstrated their limitations, and it is easy to conclude they have been totally inadequate in testing and enforcement resources. Beyond a few Oahu hotels working with DOH, it’s strictly an honor system, and people don’t fly to Hawaii for vacation only to stay inside their rooms for two weeks.

Civil Beat recently reported…more than 11,000 people in Hawaii have been diagnosed with the virus. Outbreaks at jails and nursing homes are challenging our ability to manage the disease in vulnerable settings.   “There’s no way to look back at what happened and come up with any conclusion other than we failed,” says Carl Bonham, executive director of the University of Hawaii Economic Research Organization.

Yet, Hawaii’s Lt. Governor Josh Green (and local Big Island doctor) toured Kona and Hilo Hospitals this week and stated his satisfaction with the island’s two primary hospital’s and their  readiness for a statewide reopening with the consequences of case count surges and increased hospitalizations. Green did acknowledge a shortage of on-island PPE protective supplies at the hospitals he visited.

Will Hawaii follow the same pattern seen elsewhere around the world?   Countries from New Zealand to Israel engaged early in proactive responses to the COVID-19 threat and were able to get ahead of the virus and save lives, but later became complacent with their accomplishments and under economic pressures re-opened only to experience a sharp rise of coronavirus cases and deaths, and these are countries with first class medical infrastructures, and which are not geographically fragmented, as in Hawaii.

As Hawaii re-opens for business during the middle of a global pandemic, island-bound cases and deaths will likely skyrocket, but unlike the mainland, Hawaii’s woefully lacking medical infrastructure could collapse under the weight of escalating hospitalizations — worst yet, the state’s population living on outer islands will be hardest hit, already facing a pre-pandemic chronic shortage of doctors and inadequate medical care.

State policy makers have already demonstrated their best intentions do not always fully consider the facts and consequences of this global pandemic, which so far has yielded chronic and deadly consequences for over 200,000 Americans who have died, in part from lost opportunities from a terribly mismanaged federal response “now” with fully politicized leadership team at CDC, FDA, and HHS.  No amount of Trump or chamber of commerce cheerleading and wishful thinking from local and national leadership will change that reality.

This virus is here to stay, and until there is carefully managed national policy and until a legitimate (science-based and proven) vaccine becomes available to the general population, COVID-19, its consequences, and costs will remain a fact of life.

Hawaii’s pre-pandemic tourist-dependent trade has been calculated at less than 25% of the state’s economy, and yes, it’s a big chunk of the economy, but the state will survive this segment’s temporary disruption to the economy and the loss of revenue it generates. Hawaii, like the rest of the nation has had its economic high and low tides, just as the state survived the disruption of 9-11, and the long term impact from a 2008 real estate market collapse, and the latter took a decade for the state to re-set and recover.

Hawaii may be an island state and with a long and essential supply-chain, but it has the means and potential to become increasingly self-sufficient and sustainable in both food and energy, two core drivers of any healthy economy. The state’s unique environmental assets, location, and aloha culture provide the foundation for a sustainable economy based on value, not volume.

The global market demand for a Hawaiian vacation experience will not disappear because of a pandemic disruption. The challenge for the state is to jettison past assumptions, and use this opportunity for change to pivot its visitor industry towards a sustainable economy targeting visitors and investors who appreciate the state’s island experience as something to preserve, and not to consume.

Hawaii (and the world) is feeling the Heat