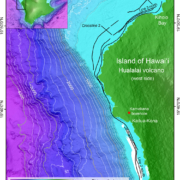 The EPA defines “Cesspools” as basically underground holes used for the disposal of human waste — which collect and discharge untreated raw sewage into the ground, where disease-causing pathogens and harmful chemicals can contaminate groundwater, streams and the ocean.

Hawaii’s cesspools release into the ground a total of approximately 53 million gallons of untreated sewage each day. 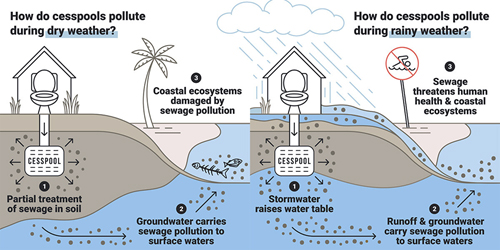 Untreated wastewater from cesspools contains pathogens that can cause:

In short, cesspools can have a significant impact on the quality of drinking water, general water quality, the health of our reefs, and the health of Hawaii’s residents and visitors.

Hawaii’s state legislature, never short on grand proclamations with far off due dates, in the 2017 session required the replacement of all cesspools by 2050.

The legislation wisely directs the Hawaii Department of Health (DOH) to evaluate residential cesspools in the state, develop a Report to the Legislature that includes a prioritization method for cesspool upgrades, and work with the Department of Taxation on possible funding options to reduce the financial burden on homeowners. The statewide cesspool ban legislation also provides for tax credits to assist homeowners with cesspool upgrades.

Is 30 years too long? So far there is no comprehensive plan to support the state’s plan to replace all cesspools of any size by 2050.

EPA to the Rescue?

Under the Safe Drinking Water Act, the EPA banned large-capacity cesspools in 2005.  Since then, the federal agency has initiated actions statewide resulting in the closure-decommissioning of  more than 3,400 of Hawaii’s cesspools; however, many hundreds more of the large-capacity systems remain in operation.  The EPA guidelines for targeted closures, as defined as “large capacity cesspools” does not include single family residential cesspools, or non-residential cesspools which receive solely sanitary waste and have the capacity to serve fewer than 20 persons per day.

In March of last year the EPA summarized their ongoing enforcement actions targeting cesspool violations within the state of Hawaii this way… “Closing down large-capacity cesspools that contaminate groundwater, streams and the ocean are a priority. The EPA will continue our efforts to identify and take enforcement actions to close the remaining large capacity cesspools in Hawaii.”

In other words, EPA’s historic enforcement focus, prior to arrival of the Biden Administration, failed to address the 88,000 plus cesspools across the state presently releasing and estimated 53 million gallons of raw sewage into the state’s groundwater daily — and 90% of Hawaii’s drinking water comes from groundwater, according to state officials.

The state Department of Land and Natural Resources has been fined nearly $222,000 for operating seven large-capacity cesspools on Kauai island. The EPA has taken action before against the department, has collected over $400,000 in fines and closed 74 cesspools.

One of the biggest problems for Hawaii reefs is sewage.  With cesspool installations (large and small alike) throughout the islands and many in coastal areas, cesspools leak into groundwater — and with heavy rains, contaminated water send pathogens and other harmful contaminants into the ocean.

Extreme rain events are predicted to become more common with human-caused global warming not only wreaking havoc on land — but the runoff from these increasingly severe storms also threatens Hawaii’s coral reefs.  The cause and effect connection between contaminated run-off and Hawaii’s coastal marine environment is becoming increasingly obvious, and the absence of a meaningful and timely statewide response to this environmental and health threat is equally obvious.

“Cesspools are essentially a hole in the ground where there is no treatment prior to wastewater entering the environment,” said Jamison Gove, a research oceanographer with NOAA who lives on Oahu’s North Shore.

Confusing Economic Signals; what does it mean for Hawaii
Scroll to top