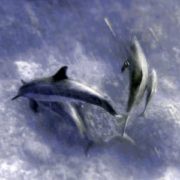 Hawaii’s remote location has historically protected the island chain from many major storm events and enabled an unique marine and land ecosystem to flourish.  As the impacts of Climate Change grow there is no escaping the planetary consequences, even when you’re living in the middle of the Pacific Ocean. 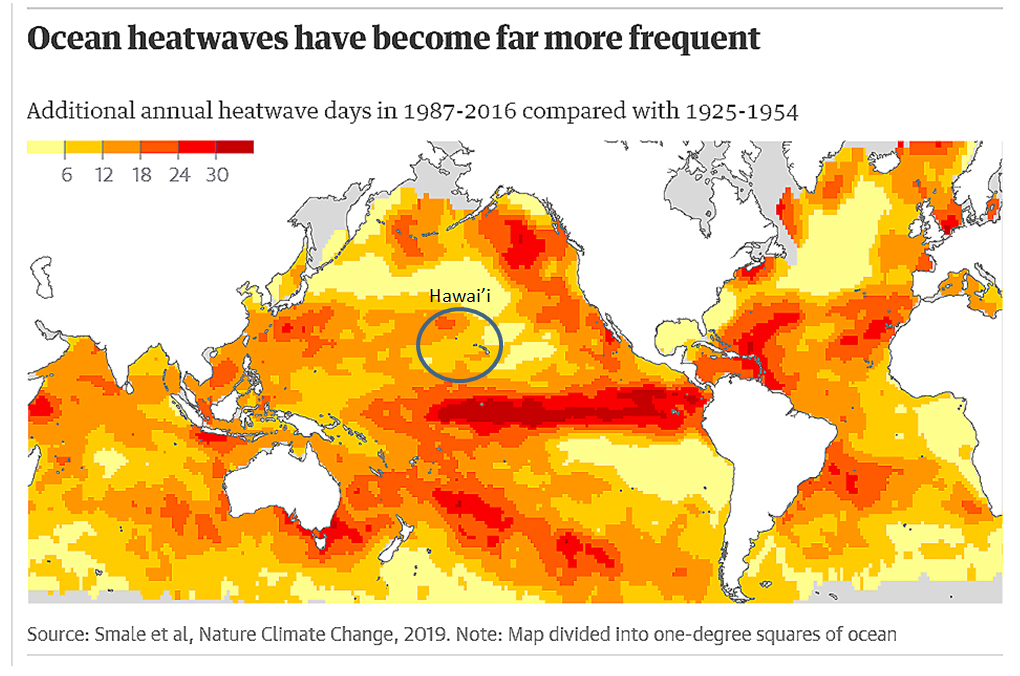 Heatwaves are sweeping oceans ‘like wildfires’, scientists reveal this week in long term effort to track the impact of global rising temperatures on the Earth’s oceans. The study found extreme temperatures are destroying kelp, seagrass and corals – with alarming impacts for Hawai’i, the planet, and humanity.

Global warming is gradually increasing the average temperature of the oceans, but the new research provides the first systematic global analysis of ocean heatwaves, when temperatures reach extremes for five days or more.

As heatwaves have increased, kelp forests, seagrass meadows and coral reefs have been lost. These foundation species are critical to life in the ocean. They provide shelter and food to many others, but have been hit on coasts from California to Australia to Spain.

“You have heatwave-induced wildfires that take out huge areas of forest, but this is happening underwater as well,” said Dan Smale at the Marine Biological Association in Plymouth, UK, who led the research published in Nature Climate Change. “You see the kelp and seagrasses dying in front of you. Within weeks or months they are just gone, along hundreds of miles of coastline.”

As well as quantifying the increase in heatwaves, the team analyzed 116 research papers on eight well-studied marine heatwaves, such as the record-breaking “Ningaloo Niño” that hit Australia in 2011 and the hot “blob” that persisted in the north-east Pacific from 2013 to 2016. They have adverse impacts on a wide range of organisms, from plankton to invertebrates, to fish, mammals and seabirds.

The scientists compared the areas where heatwaves have increased most with those areas harboring rich biodiversity or species already near their temperature limit and those where additional stresses, such as pollution or overfishing, already occur, including the western Pacific. Ocean systems are being battered by these multiple stresses, and local studies indicate that Hawaii’s marine reef system has not escaped the same stresses which are at work around the globe.

The natural ocean cycle of El Niño is a key factor in pushing up temperatures in some parts of the ocean, as Hawaii’s marine ecosystems experienced massive bleaching in 2015-16, amplified by global warming (an effect of carbon loading from fossil fueled emissions, and in turn, heating of ocean temperatures rapidly over the past 50 years).

The study further concludes the gradual overall heating of the oceans from El Niño driven heatwaves are now worse when they strike.  As ocean starting temperature rise, so does the absolute temperatures [in a heatwave] that is much higher and more stressful to marine life. Some marine wildlife is mobile and could in theory swim to cooler waters, but ocean heatwaves often strike large areas more rapidly than fish move.

“This [research] makes clear that heatwaves are hitting the ocean all over the world … The ocean, in effect, is spiking a fever,” said Prof Malin Pinsky, at Rutgers University, US. “These events are likely to become more extreme and more common in the future unless we can reduce greenhouse gas emissions.”

The damage from over-fishing and global warming has created a one-two punch and knockout to global fishing stocks. In a series of other scientific papers published last week, the conclusion was stark – ocean warming has significantly contributed to a reduction in sustainable fish catches by 15% to 35%.

Science magazine’s March 1, 2019 publication states …”Fisheries provide food and support livelihoods across the world. They are also under extreme pressure, with many stocks over-fished and poorly managed. Climate change adds to the burden fish stocks bear, but such impacts remain to be fully quantified.

“We were stunned to find that fisheries around the world have already responded to ocean warming,” according to work published by Pinsky and his colleagues.

Another study showed that achieving the 2C climate change target set out in the Paris agreement would protect almost 10m tons of fish catches each year, worth tens of billions of dollars. 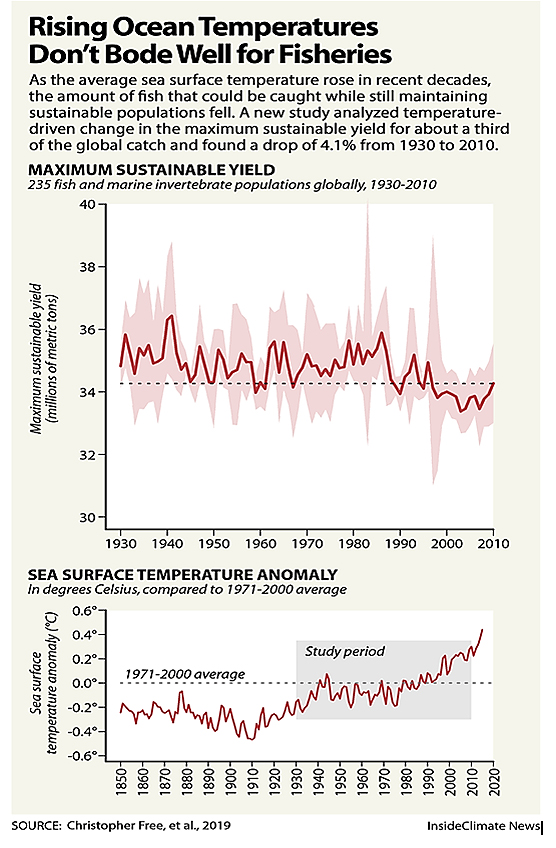 They found that an overall reduction in fishery yields has occurred over the past 80 years. Although some species are predicted to respond positively to warming waters, the majority will experience a negative impact on growth. As our world warms, responsible and active management of fisheries harvests will become even more important.

Over-fishing reduces reproduction rates in fish populations and warming damage the habitat. When the water around them warms, the added strain makes these already weakened populations more susceptible to collapse, according to the study, which goes on to state, “Over fishing makes populations of fish more vulnerable to climate change, and climate change is hindering our abilities to rebuild over-fished fish populations.”

Other research found that limiting warming to 1.5 degrees would result in an annual catch of fish that is 9.5 million metric tons higher than in the 3.5 degrees scenario. That represents a difference of more than $23 billion in annual revenue for fishers and seafood workers.

“That is huge,” said Rashid Sumaila, the study’s lead author and director of the Fisheries Economics Research Unit at the University of British Columbia’s Institute for the Oceans and Fisheries.

Roughly 90 percent of the catch that would be protected by limiting warming to 1.5 degrees would occur within the territorial waters of developing countries, many of which are in tropical regions that are highly dependent on fish and have contributed little to greenhouse gas emissions, Sumaila said.

A second study, published in the journal Science Advances, considered the extent to which global fisheries would benefit if global warming is limited to the Paris Agreement goal of 1.5 degrees Celsius above pre-industrial levels, as compared to a “business-as-usual” pathway based on current greenhouse gas mitigation policies that would bring 3.5 degrees of warming.

In the space of one week, several credible scientific publications have underscored that unless we (which includes Hawai’i) take evasive action, our future oceans will (do) have fewer fish, fewer whales and frequent and dramatic shifts in the marine ecosystem – all together, these human-caused changes will have significant environmental and economic implications for humans who depend on the ocean, which not only includes Hawai’i, but most of humanity.