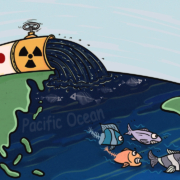 Japan’s government announced on Tuesday (April 13) that it will dump more than a million tons of contaminated wastewater from the Fukushima nuclear power plant into the Pacific Ocean. The highly contaminated water contains more radioactive material than previously acknowledged.

Roughly 1.25 million tons (1.13 million metric tons) of water have accumulated around the Fukushima Daiichi nuclear power plant in northeastern Japan since 2011, after a magnitude-9.0 earthquake and resulting tsunami devastated the region. The twin disasters killed nearly 20,000 people, according to NPR, and caused meltdowns in three of the plant’s six reactors, triggering the worst nuclear disaster since Chernobyl.

To keep the remaining reactor cores from melting, officials with the Tokyo Electric Power Company (TEPCO) have been pumping nearly 200 tons (180 metric tons) of cooling water through the site every day, according to The New York Times. 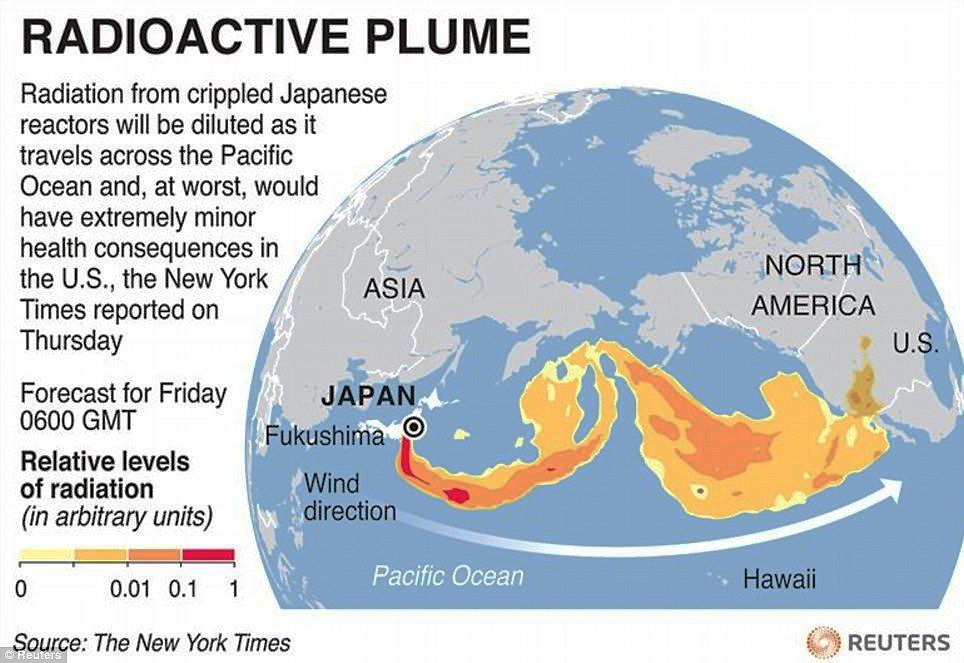 The contaminated wastewater is stored in more than 1,000 enormous tanks on site and automatically filtered to remove most of the radioactive material, except for tritium — a radioactive isotope of hydrogen that is considered hazardous to human health in large amounts, according to the nonprofit Health Physics Society.

Now, 10 years after the disaster, TEPCO is running out of room to store the wastewater.

The disposal plan, which was approved in a government cabinet meeting on Tuesday, will see the wastewater gradually discharged into the Pacific Ocean, most likely over the course of several decades.

One large concern is that TEPCO’s claims about the water’s safety may be wrong. A study published in the journal Science in August 2020 found traces of several other radioactive isotopes in the Fukushima wastewater, many of which take much longer to decay than tritium, some with a toxic radioactive half life of hundreds of years.. 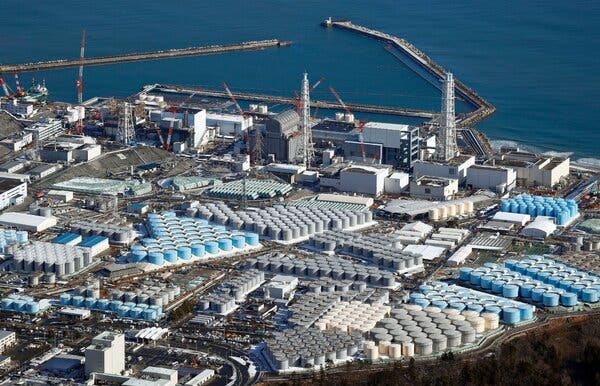 There are now about 1.25 million tons of wastewater stored in more than 1,000 tanks at the plant site. The water continues to accumulate at a rate of about 170 tons a day, and releasing all of it is expected to take decades.

In 2019, the Japanese Ministry of Economy, Trade and Industry proposed disposing of the wastewater either by gradually releasing it into the ocean or by allowing it to evaporate. The International Atomic Energy Agency said last year that both options were “technically feasible.”

Hiroshi Kishi, head of Japan’s National Federation of Fisheries, told reporters that his group was still opposed to the ocean release. Neighboring countries including China and South Korea have also expressed concerns.

Responding to Japan’s decision, the U.S. State Department said in a statement, “In this unique and challenging situation, Japan has weighed the options and effects, has been transparent about its decision, and appears to have adopted an approach in accordance with globally accepted nuclear safety standards.”

The International Atomic Energy Agency welcomed Japan’s announcement and said it would offer technical support. It called the plan to release the water into the sea in line with international practice.

It is also equally safe to assume the information made publicly available by TEPCO on the disaster and its planetary health impacts are incomplete at best and remain mostly unknown 10 years later.

What is known, the only effective decontamination methodology TEPCO and the Japanese government have agreed upon is the release of the radioactive contaminated water into the Pacific Ocean, and first to “dilute it” as a means of mitigating the environmental health impacts.

Byproducts of the TEPCO meltdown contained Plutonium-239, one of the three main isotopes demonstrated usable as fuel in thermal spectrum nuclear reactors, along with uranium-235 and uranium-​233.

In fact, the uncontrolled radioactive releases leaking into the ocean at TEPCO did in fact contain plutonium 239, considered one of the most toxic substances on Earth with a radioactive half-life in excess of 24,000 years.  It is safe to assume that the TEPCO holding tanks today also contain plutonium 239 as part of the planned ocean release of wastewater, the likely answer is yes.

Much of the existing water has already been filtered by a process designed to remove more than 62 radioactive contaminants, details as to the effectiveness of the filtration methods employed and which radioactive elements have been filtered out, and to what extent, remains unknown to the public and independent observers.

Japan’s neighbors including China and South Korea opposed the plan. Environmental group Greenpeace as well as local residents and fishermen also have raised their concerns.

The best the International Atomic Energy Agency (oversight and lobbying group for the nuclear power industry) could say about the TEPCO plan …“Japan’s chosen water disposal method is both technically feasible and in line with international practice.”

The IAEA blank check endorsement failed to recognize International Maritime Organization laws which prohibit the intentional release of radioactive material in the open ocean — rules that were created following Russian low-level dumping in the Sea of Japan during the 1990s.

There is no easy alternative answer.

Certainly, EM’s product claims fall short in offering an effective alternative, which leaves TEPCO with only one other option: expanding the storage capacity for the radioactive water in either above or below ground storage.

In that alternative option, that would require at least 97 per cent of the tritium to decay before deemed safe and that would take another 60 years due its short half-life, but that still does not address the question of other post-filtration radioactive elements which may also by in the wastewater, including plutonium 239, stored in tanks in an earthquake-prone region.

There are no good or environmentally safe answers to the TEPCO disaster, only that it should have never occurred.

“Today’s decision by the government of Japan is a milestone that will help pave the way for continued progress in the decommissioning of the Fukushima Daiichi nuclear power plant,” the agency said in a statement. The decommissioning process is expected to take decades.

To Pacific peoples, who have carried the disproportionate human cost of nuclearism in our region, this is yet another act of catastrophic and irreversible trans-boundary harm that our region has not consented to. 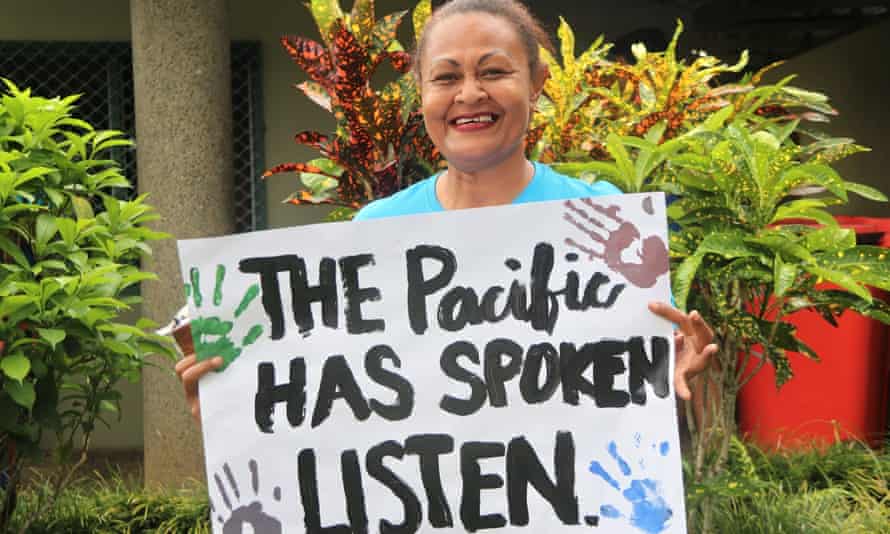 While Japan’s plan is for the water to be diluted first and discharged over the course of about 30 years, and the Japanese government has tried its hardest to convince the wider public of the treated water’s safety through the use of green mascots and backing from American scientists, Pacific peoples are once again calling it for what it is: an unjust act.

“We need to remind Japan and other nuclear states of our Nuclear Free and Independent Pacific movement slogan: if it is safe, dump it in Tokyo, test it in Paris, and store it in Washington, but keep our Pacific nuclear-free,” said Motarilavoa Hilda Lini, Vanuatu stateswoman and veteran activist of the Nuclear Free and Independent Pacific (NFIP) movement, after Japan’s announcement. “We are people of the ocean, we must stand up and protect it.”

Many in the Pacific have lived experience of nuclear harm with the continuing irradiation of our environments, while survivors and their descendants continue to experience harrowing maladies such as lymphatic cancers, thyroid and reproductive health issues.

Since the Hiroshima and Nagasaki detonations in 1945, 315 nuclear tests have been undertaken across the Marshall Islands, Australia, Kiribati and Maohi Nui. All of which were, at the time, described by nuclear nations to be scientifically sound and safe.

Indeed, both Japan and Pacific states share the trauma of nuclear testing. However, the Japanese government has since enthusiastically embraced the nuclear power industry.

One would think that Japan’s proposal to dump nuclear waste into the Pacific Ocean is something novel but there is a history of precedent. The shady practice was virtually a global norm in the past for the likes of nuclear nations like Japan, America and Europe. Things came to a head in 1979, when Japan’s clandestine proposal to dump nuclear waste in neighbouring Northern Marianas was exposed. Japan severely underestimated a united front from political leaders, non-governmental groups and grassroots activists from the Northern Marianas, Micronesia and the Pacific.

Swift Action to Cut Methane Emissions Could Slow the Earth’s Warming by 30...
Scroll to top