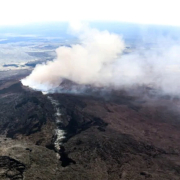 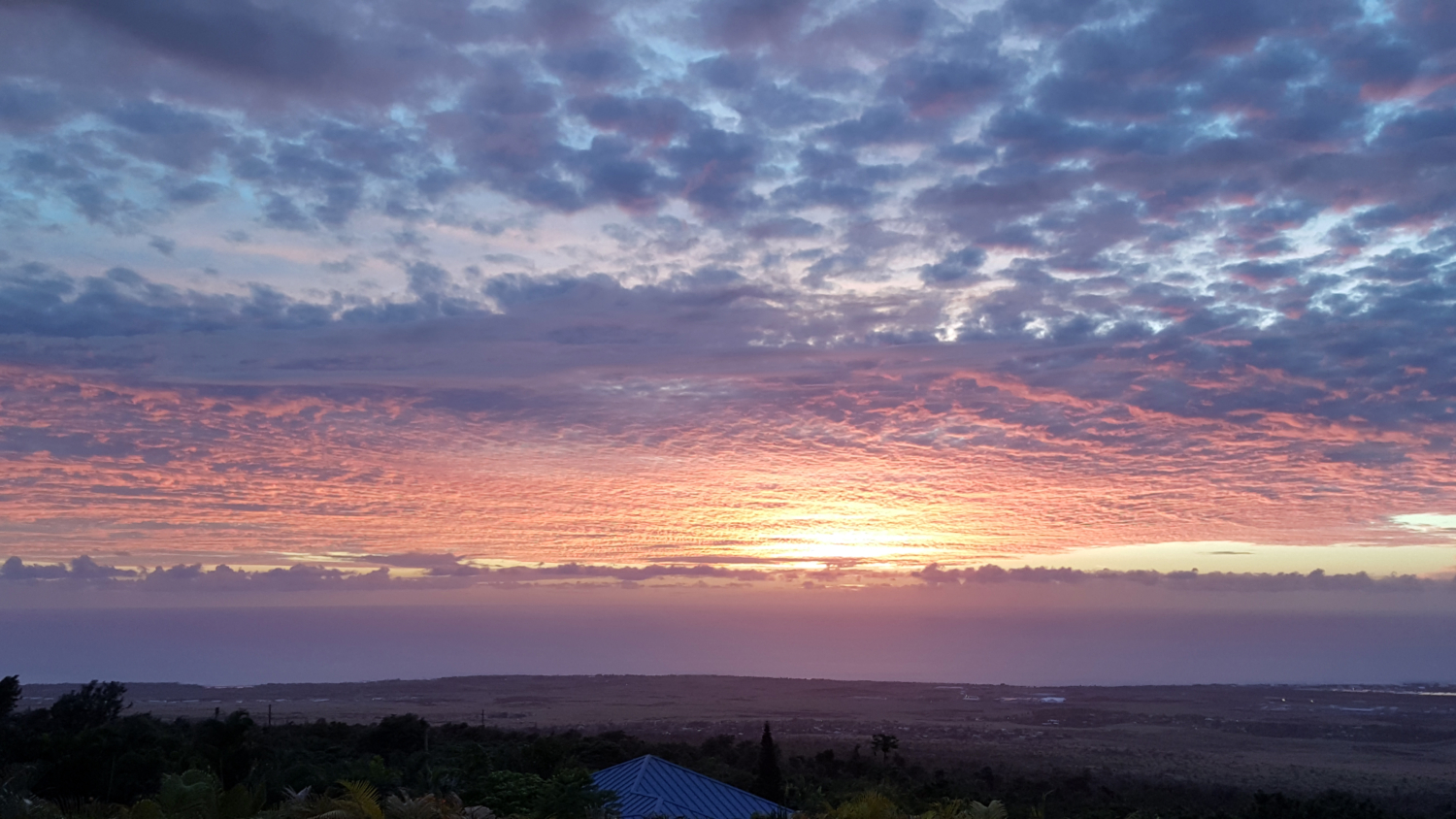 High levels of sulfur dioxide (SO2) are currently being released from the volcano at the rate of 35,000 to 40,000 tons per day.

As of yesterday, the lava lake inside Halema‘uma‘u crater was well over 550 feet deep and rising, while being fed by two fissures, according to the Hawaiian Volcano Observatory.

The lava lake volume was estimated to be about 27 million cubic yards, about 4.8 billion gallons — a 20 feet rise in the crater within the last 24 hours.  The surface of the lake is presently about 1,500 feet below the crater rim observation site, according to HVO reports.

“Vog is also impacting the leeward (Kona side) of Hawaii island, as the National Weather Service reported that a Hawaiian eddy will transport Vog onshore,” and poor air quality may intermittently reach a “moderate” air pollution category as levels of SO2 and PM2.5 rise. Kilauea Volcano as the summit eruption that began on the evening of December 20th continues. The eruption remains confined within Halema‘uma‘u crater. Monitoring data show no signs of activity migrating from the summit into the rift zones, nor indications of summit collapse as with the major 2018 eruption.

The emissions and other aerosols make up “Vog,” or volcanic smog, impacting the Ka‘u  and Pahala, Naalehu, and Ocean View districts of Hawaii Island.  Trade winds and sea breezes then push the air pollution south and southwest, and up the coast onto West Hawaii and into south and north Kona. Newly arriving visitors to the island at Kona airport are greeted by a sky that resembles Los Angeles in 1950’s, when smog alerts were an everyday occurrence. According to the University of Hawaii at Manoa’s Vog Measurement and Prediction Project, “Vog is likely to impact the western half of Hawaii island (Ka’u district) that includes Pahala, Na’alehu, Ocean View, and South Point areas,” the forecasters wrote, adding that vog will also continue to be transported onshore to South and North Kona districts.

Based on current emission rates (and subject to change) air quality is likely to remain “acceptable” for the general population for much of the week of January 10th, except for those persons with asthma and other chronic respiratory conditions.

As of Saturday (Jan 9th) sulfur dioxide emissions remained elevated and in the range of 3,000 tons per day to 6,500 tons per day. Consistent with SO2 emission levels  in that range within the past two weeks.

The eruption of Kilauea volcano that began Sunday (December 20th) quickly created air quality hazards for Hawaii Island, but nothing as bad as the 2018 run-up to the volcano’s last major eruption, which created significant toxic air emissions affecting large areas of Hawaii’s population.

The current eruption, as with previous events is projected to spread VOG (volcanic smog) across the island chain, according to Department of Health report issued earlier this week.

While all eruption activity is presently confined within Hawai’i Volcanoes National Park, VOG conditions and sulfur dioxide air levels may increase or fluctuate in coming days and weeks, impacting various parts of the state.

Areas downwind of the summit, such as Pahala and Ocean View, and West Hawaii Island have already experienced levels of sulfur dioxide air pollution causing some respiratory health problems, especially for residents with sensitive and chronic respiratory heath issues, including asthma.

Areas around the summit of Kilauea on Wednesday were blanketed in high levels of sulfur dioxide and particulates that reached levels established by the Environmental Protection Agency as hazardous, according to a statement from Hawaii Volcanoes National Park.

• Reduce outdoor activities that cause heavy breathing, especially for sensitive groups such as children, the elderly and individuals with preexisting respiratory conditions.

• Stay indoors and close windows and doors. If an air conditioner is on, set it to recirculate.

• If moving out of an impacted area, turn on the car’s air conditioner and set it to recirculate.

• Always keep medications on hand and readily available. Daily prescribed medications should be taken on schedule and may protect from the effects of sulfur dioxide.

• Contact a doctor as soon as possible if any health problems develop.

• Do not smoke and avoid secondhand smoke.

The department also warned that COVID-19 face coverings and masks do not protect from sulfur dioxide and other VOG pollutants.   Officials also offered the following online reporting resource on island Vog and Air Quality:

Stunning Before and After 2020 Volcano Eruption Pictures 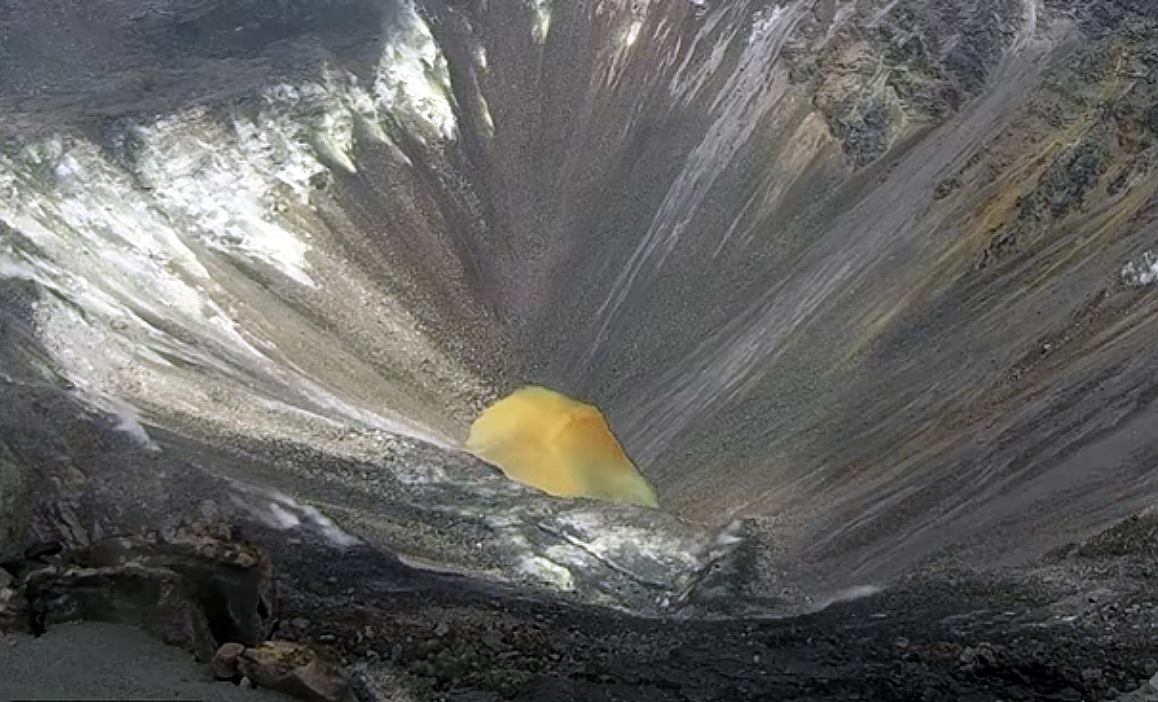 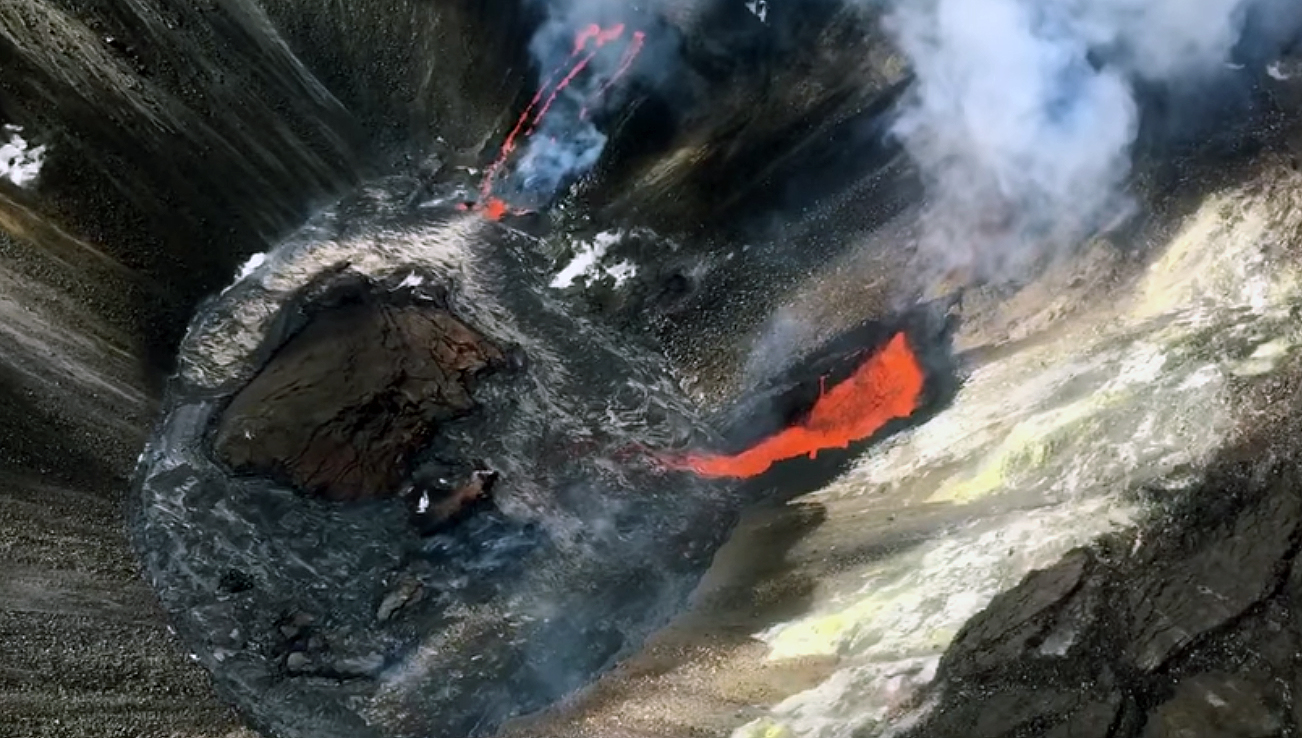 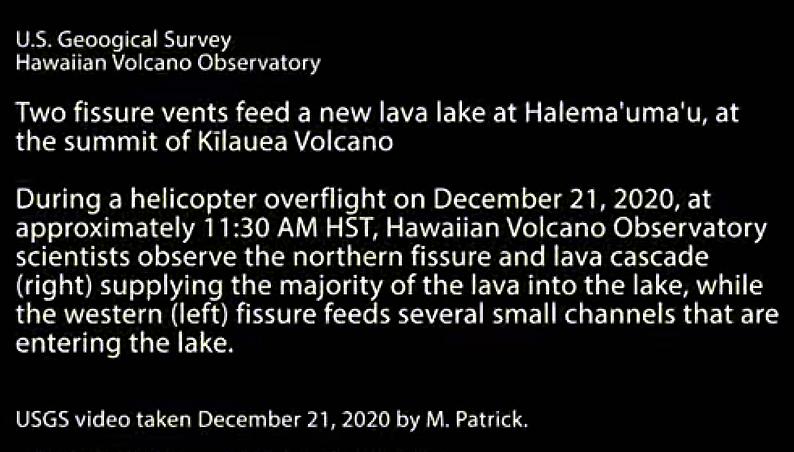 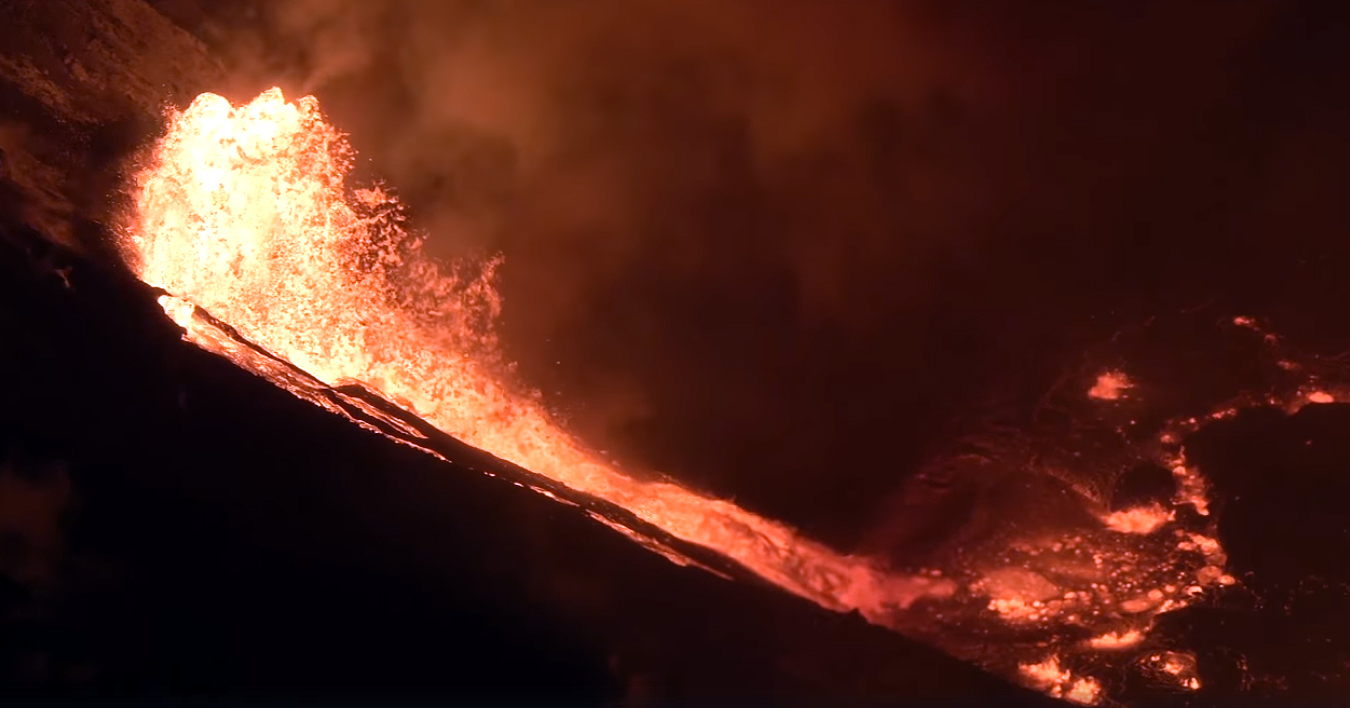 In a tweet this afternoon, HVO stressed “that the current activity at Kilauea’s summit is confined to Halemaʻumaʻu crater within Hawaii Volcanoes National Park. Monitoring data show no changes to the lower East Rift Zone or other parts of the volcano.”

Hawaiian Volcano Observatory scientists conducted a helicopter overflight of Kilauea’s summit this morning. The overflight revealed that two of the three fissures are still active and feeding lava into the new lava lake inside Halemaʻumaʻu crater.

Activity over the past 10 hours at Kilauea volcano has been characterized by three fissure vents on the north and northwest walls of Halemaʻumaʻu crater, according to the USGS.

Fountaining lava at these vents is estimated to be up to 82 feet high. The vents are feeding lava flows into the base of Halemaʻumaʻu crater, which is being filled with a growing lava lake.

The lava lake has been rising approximately several yards an hour since the eruption began. The current lava lake exhibits a circulating perimeter, but stagnant center.

The event has been accompanied by only moderate amounts of deformation, indicating deflation of a magma reservoir under Halemaʻumaʻu. Rates of tilting have decreased slightly since the beginning of the eruption.

Increased rates of seismicity in the summit region continue. Some of these earthquakes may be felt.

Civil Defense reported at 6:09 a.m. that “the situation at the Halema‘uma‘u crater of the Kilauea volcano has stabilized.”

“The crater lake has evaporated and is slowly being replaced with a lava lake,” according to Civil Defense. “The threat of ash fallout is very low but is possible in the Ka‘u and South Kona districts.”

“An eruption has commenced within Kilauea’s summit caldera. The situation is rapidly evolving and HVO will issue another statement when more information is available,” the observatory said. “Accordingly, HVO has elevated Kīlauea’s volcano alert level to WARNING and its aviation color code to RED.”

This video is from the rim of Kīlauea caldera just after 6 a.m. HST on December 21, 2020. The middle of the three fissures that opened in Kīlauea caldera last night has paused, but activity continues at the main eastern fissure, as well as the weaker western fissure. Lava flows from these vents are cascading down the walls of Halemaʻumaʻu, the bottom of which is being filled with a lava lake. The lake has filled more than 50 meters of the crater floor. Volcanic gas is travelling downwind of the vents, and and small volcanic glass particles (such as Pele’s hair) are being deposited locally downwind of the vent.