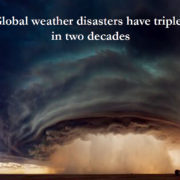 After a months-long tug-of-war and relative atmospheric balance between El Niño and La Niña, the National Oceanic and Atmospheric Administration announced Thursday that La Niña is the winner, has returned to Hawaii, and is expected to stick around through the winter and into next year.

El Niño and La Niña reflect the two end points of an oscillation cycle in the Pacific Ocean. The cycle is not fully understood, but tends to swing back and forth every 3-7 years, for Hawaii and the world, it’s now La Niña’s turn.

La Niña is defined as cooler than normal sea-surface temperatures in the central and eastern tropical Pacific Ocean that impact global weather patterns. La Niña has the opposite effect of its hotter cousin, El Niño.  The atmosphere cools in response to the cold ocean surface, and less water evaporates. The cooler, dry air is dense. It doesn’t rise or generally form extreme storms. As a result, less rain falls over the eastern Pacific. Ecuador, Peru, and the southeastern United States are correspondingly dry.

During a La Niña cycle, such winter storms tend to be less frequent, and bad news for California and the West in general, now experiencing an extended period of extreme drought conditions producing serious agricultural and economic ramifications extending far the borders of the directly affected states.

Historically, Hawaii could expect more consistent rainfall during a La Niña cycle, but that may changing.

Scientists at UH Mānoa report that during La Niña events rainfall has historically been greater than normal – building up Hawai‘i’s groundwater supplies. 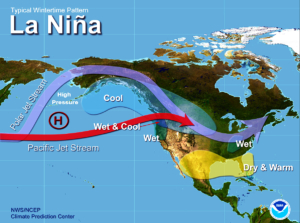 However, recent research by scientists at UH Manoa, Nanjing University of Information Science and Technology, and NOAA’s Honolulu National Weather Service (NWS) Office determined that the relationship between La Niña and rainfall in Hawai‘i has changed and recent La Niña years have in fact brought less-than-normal rainfall.

Because the La Niña events have traditionally brought excess rainfall to the state, the new information indicates decreased rainfall during La Niña may be the new norm, with significant implications for Hawaii’s agriculture, and the stat’s water resource management priorities.

As reported in the today’s edition of the West Hawaii Today; citing local NOAA officials “…by the time we get into January, the model forecasts are looking at large-scale wetter-than-normal conditions across the Hawaiian Islands area, and that will last into April”.

Today’s report and prediction of a wetter directly contradict previous research reporting on scientists at UH Manoa, Nanjing University of Information Science and Technology, and NOAA’s Honolulu National Weather Service (NWS) Office who have determined that the relationship between La Niña and rainfall in Hawai‘i has changed and recent La Niña years have in fact brought less-than-normal rainfall.

The scientists also reported a strengthening, broadening and westward shifting of the eastern North Pacific subtropical 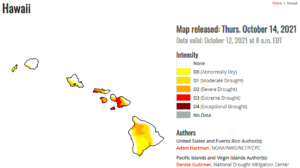 high-pressure system, coupled to an intensification of the subtropical jet stream – in short: “reducing rainfall during the recent La Niña seasons.”

Additionally, assessing storm-track data revealed that the changes found in the aforementioned circulation features created a less favorable environment for the development of Kona low-pressure systems and fronts in the vicinity of Hawai‘i.  Variability in tropical sea surface temperatures and circulation features in the northern Pacific Ocean have also changed during La Niña wet seasons – further forcing the changes in La Niña-year rainfall.

During La Niña, waters off the Pacific Coast are colder and contain more nutrients than usual. 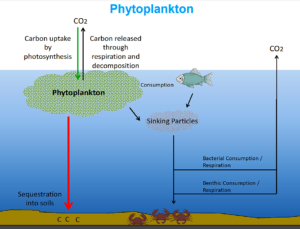 Any change in phytoplankton numbers alters the ocean food chain. … During La Niña conditions as in 1998, the opposite effect occurs as the easterly trade winds pick up and upwelling intensifies bringing nutrients like iron to the surface waters, which increases phytoplankton growth, which is good for the fish and fishing.

La Niña begins with a cooling of waters in the eastern tropical Pacific. The basin alternates between El Niño and La Niña every two to seven years on average. That pocket of cooler ocean water chills the air above it, inducing a broad sinking motion. It’s that subsidence, or down-welling of cool air, that topples the first atmospheric domino.

During La Niña winters, high pressure near the Aleutian chain shoves the polar jet stream north over Alaska, maintaining an active storm track there. The Last Frontier often ends up cooler than average. The confluence of the polar and Pacific jet streams, as shown in the image above, helps drag some of that cold air across the Pacific Northwest and adjacent parts of the northern Plains.

That keeps the northern United States anomalously wet, while the South is left largely warm and dry. This is bad news for California and other parts of the Southwest, which are enduring a historic drought. The persistence of warm, dry conditions would cause the drought to worsen and potentially prolong the fire season.

There is evidence that the record-shattering cold blast of February that wrought havoc on Texas’s electrical grid was by-product of an impressive atmospheric feature of the La Niña effect which historically has been the formation of a ridge of high pressure over Eastern Canada which acts an immovable barrier to the jet stream, keeping it parked over Eastern Canada for much of the winter. Where that block relocates will potentially be critical to how winter begins and may even set the tone for the winter.

The behavior of the polar vortex, the zone of frigid air surrounding the Arctic, will also play a crucial role.  It’s been showing signs of weakening or becoming more unstable as 21st century Climate Change dynamics take hold.

A weak, unstable vortex is more prone to unleashing frigid air over the Lower 48, compared with one that is strong and stable and that tends to lock up cold over the high latitudes.  “Once the polar vortex weakens, it could be predisposed to further weakening in the coming weeks or months resulting in a more severe (mainland) winter”, according the National Weather Service.