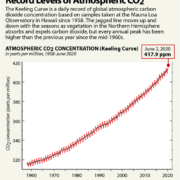 Today, there is more carbon dioxide in the air now than at any time in the last 3 million years — The last time there was this much CO2 in the atmosphere, global average surface temperatures were significantly warmer than they are today, and sea levels were 50 to 80 feet higher.

The continuing rise in CO2 concentrations in the atmosphere may sound surprising in light of recent findings that the pandemic, and the associated lockdowns, had led to a steep drop in global greenhouse gas emissions; a 17 percent decline in early April, but only a temporary blimp on the climate radar. 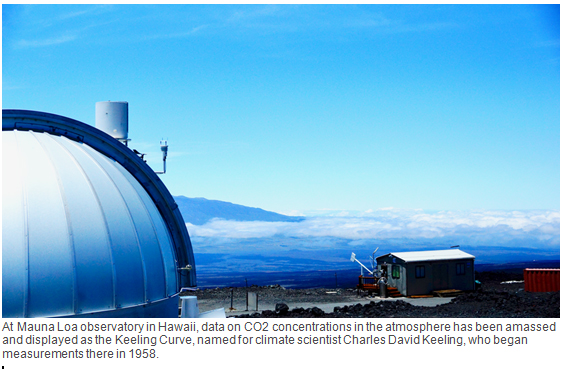 “The buildup of CO2 is a bit like trash in a landfill. As we keep emitting, it keeps piling up,” said Ralph Keeling, who directs Scripps’s carbon dioxide monitoring program, and whose late father, Charles David Keeling, began measurements at the Mauna Loa Observatory in Hawaii in 1958, and at that time it was 313 parts per million in atmospheric CO2 gas concentrations.

Fossil Fuel Emissions Push Greenhouse Gas Indicators to Record High in May – New measurements show that not even the pandemic can flatten the Keeling Curve.

As graphs go, the Keeling Curve is simple, but it clearly illustrates the planet’s vexing global warming challenge. In a decades-long upward zigzag it charts the unrelenting increase of heat-trapping carbon dioxide in the atmosphere.

Natural factors such as El Niño events in the tropical Pacific Ocean and changes in terrestrial carbon sinks, such as forests, can have a large influence on the rate of climb in CO2 concentration from year to year, but the historic trend is undeniable.

This year’s May CO2 peak marked an increase of about 2.4 ppm compared with a year ago. The 2010 to 2019 average rate of increase is precisely the same at 2.4 ppm per year, according to NOAA. The decline of El Niño during the past year may help explain why the increase in the last year was not as large as recent years.

Because atmospheric levels of CO2 are cumulative, they will continue to increase until net emissions are cut to zero. Molecules of CO2 can remain in the atmosphere for up to 1,000 years.

Scientists warn that we’re on course to reach 450 ppm by mid-century, where levels would need to stop increasing to have a decent chance of meeting the goals in the Paris climate agreement, which seeks to limit climate change to well below 3.6 degrees (2 Celsius) above preindustrial levels by 2100. 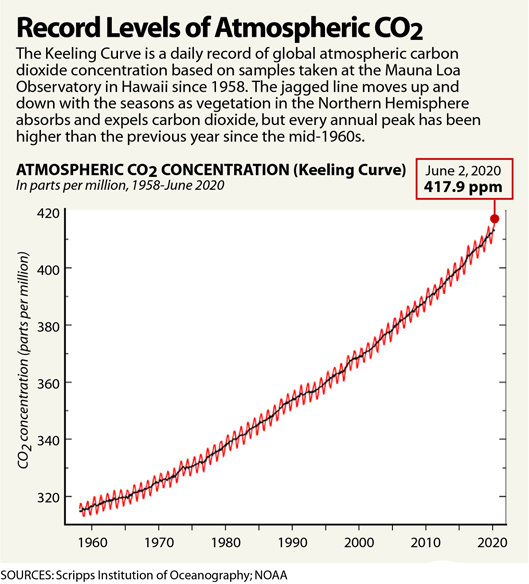 Kim Cobb, a climate scientist at Georgia Tech, says the new findings underscore the need to act now. “It is a reminder that climate change is not on pause in any way, shape or form,” she said.

“We estimated that fossil carbon emissions dropped 8 percent [during] January through April, from 12 billion metric tons in 2019 to 11 billion in 2020,” he said. “A billion tons is a lot, but not so much that we can find it with statistical confidence.”

Keeling says it would take a sustained drop in emissions, rather than a sudden decline related to the coronavirus pandemic, to show up more clearly in measurements of atmospheric CO2. “What really matters here is setting a new trajectory,” he said.

According to a comprehensive international study released last week, Researchers studying one of the most important and vexing topics in climate science — how sensitive the Earth’s climate is to a doubling of the amount of carbon dioxide in the atmosphere — found that global warming is extremely unlikely to be on the low end of estimates.

Scientists say it is likely that if human activities — such as burning oil, gas and coal along with deforestation — push carbon dioxide to such levels, the Earth’s global average temperature will most likely increase between 4.1 and 8.1 degrees Fahrenheit (2.3 and 4.5 degrees Celsius). The previous and long-standing estimated range of climate sensitivity, as first laid out in a 1979 report, was 2.7 to 8.1 degrees Fahrenheit (1.5 to 4.5 Celsius).

If the warming reaches the midpoint of this new range, it would be extremely damaging, said Kate Marvel, a physicist at NASA’s Goddard Institute of Space Studies and Columbia University, who called it the equivalent of a “five-alarm fire” for the planet.   The new range is narrower than previous studies but shows at least a 95 percent chance that a doubling of carbon dioxide, which the world is on course to reach within the next five decades or so, would result in warming greater than 3.6 degrees Fahrenheit (2 degrees Celsius) relative to pre-industrial temperatures.

The Trump administration is revoking rules that require oil and gas drillers to detect and fix leaks of methane, a greenhouse gas that heats the planet far faster than carbon dioxide.

Methane has a much more potent short-term warming effect than CO2 and addressing it is critical to slowing global heating as the world is already on track to become more than 3C hotter than before industrialization.

The Trump administration’s changes apply to new wells and those drilled since 2016, when President Barack Obama enacted the regulation in an effort to help stall climate change during a boom in fracking – a method of extracting fossil gas by injecting water and chemicals underground. The regulations required companies to regularly check for methane leaks from valves, pipelines and tanks.

Roughly a quarter of global warming the planet has experienced in recent decades has been due to methane, said Robert Howarth, a researcher who studies methane at Cornell University. The oil and gas industry is the biggest source of the pollutant.

Methane emitted today is largely gone in 30 years and totally gone in about 60 years, but it has a big effect on the climate in the meantime. That effect is most significant in the first months methane is released, when it is about 120 times stronger than carbon. That drops to around 86 times more powerful over 20 years and 33 times more powerful if compared with carbon over 100 years, Howarth said.

US methane emissions have become more concerning as scientists have begun to better understand their prevalence and impacts, and as gas production has continued to grow rapidly, increasing 10% last year.

Average global temperatures are already more than 1C higher. And they are expected to be 1.5C to 2C higher within the next 10 to 25 years, Howarth said. Reductions in carbon have a delayed effect on temperatures. But reductions in methane have a more immediate impact.

On the Path to Extinction

The oceans could look much emptier by 2100, according to a new study that found that most fish species would not be able to survive in their current habitat if average global temperatures rise 4.5 degrees Celsius by the end of the century, as The Guardian reported.

The researchers of the new paper said that 60 percent of fish species face a grave threat from global heating if temperatures approach that worst-case scenario level. The species under threat include many common fish found in grocery stores, including staples like Atlantic cod, Alaska pollock and sockeye salmon, and sport fishing favorites like swordfish, barracuda and brown trout, as CNN reported.

The new study, published in the journal Science, looked at how nearly 700 fresh and saltwater fish species respond to warming ocean temperatures. The problem for most fish is that as ocean temperatures rise, the oxygen level goes down, which makes it extremely challenging for embryos to survive.

“A 1.5C increase is already a challenge to some, and if we let global warming persist, it can get much worse,” said Hans-Otto Pörtner, a co-author on the paper and a climatologist at the Alfred Wegener Institute, Helmholtz Centre for Polar and Marine Research in Germany, as The Guardian reported.

That 1.5 degrees Celsius threshold would result in 10 percent of marine species suffering over the next 80 years, including the aforementioned grocery staples.

However, even a 10 percent decline in fish species has a large ripple effect on ecosystems as one species being pushed out effects the food supply and the habits of many other species that have evolved to be interdependent.

“More than half of the species potentially at risk is quite astonishing, so we really emphasize that it’s important to take action and follow the political commitments to reduce climate change and protect marine habitats,” said Dr. Flemming Dahlke, a marine biologist at Germany’s Alfred Wegener Institute and one of the authors of the study, as CNN reported.

“Some species might successfully manage this change,” said Dahlke, as the Daily Mail reported. “But if you consider the fact that fish have adapted their mating patterns to specific habitats over extremely long time frames, and have tailored their mating cycles to specific ocean currents and available food sources, it has to be assumed that being forced to abandon their normal spawning areas will mean major problems for them.”

A lot of this is a conservative estimate since the study did not take into account pollution or the increased acidity of the ocean, which could present additional challenges to sensitive species, as The Guardian noted.
“Some tropical fish are already living in zones at their uppermost tolerance, their areas are already 104F,” Pörtner said. “Humankind is pushing the planet outside of a comfortable temperature range and we are starting to lose suitable habitat. It’s worth investing in the Paris Climate Accord goals.”

Pollen related allergies and their symptoms are starting earlier in the year and seemingly getting worse, doctors around the world now reporting.  Allergy season is worse than ever, with a constellation of symptoms — runny nose, itchy eyes, sneezing, and even difficulties in breathing, changes tracked back to the increasing global effects of climate change.

Increasingly, patients are telling their doctors that their allergy symptoms have become increasingly severe in recent years. One reason for this may be the rise in seasonal pollen counts, as demonstrated by ragweed, one of the most common allergens in the United States.

Studies show that higher levels of atmospheric carbon dioxide, which is produced when fossil fuels are burned for energy, leads to increased plant growth and pollen production. Between 1900 and 2019, the concentration of carbon dioxide rose from 280 to 412 parts per million, which correlates with a more than twofold increase in the production of ragweed pollen, with trends projected to increase fourfold in the next 40 years with continued unchecked carbon dioxide emissions.

This escalation of seasonal pollen concentration does not only affect quality of life, it also has an economic impact, as those suffering from allergies spend more money on medicine to control and relieve their symptoms.

For those who are experiencing the familiar symptoms of sneezing, itchy eyes and stuffy nose, this is not just a “bad pollen” year. The world is warming and pollen is lasting longer and increasing in concentrations all around us.