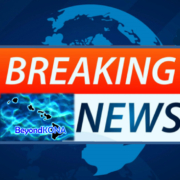 Ukraine is a country clinging to independence in the face of a broad and bloody assault intent on toppling Ukraine’s democratic government and scramble the post-cold war world order.  Vladimir Putin is determined to overthrow Ukraine’s government and replace it with a regime of his own.

The invasion represents Putin’s boldest effort yet to redraw the map of Europe and revive Moscow’s cold war-era influence. It has triggered an international response including an uncharacteristic unified NATO response, direct sanctions on Putin, military and economic aid from the United States, support from Ukraine’s neighboring NATO countries.

Russia’s invasion of Ukraine has also abruptly transformed the world. Millions of people have already fled. A new Iron Curtain is grinding into place. An economic war deepens, as the military conflict escalates, civilian casualties rise and evidence of horrific war crimes mounts.

Ukraine is far from Hawaii’s shores, but the implications of this war are global, including an embargo on importing Russian oil which Hawaii’s electric utilities are dependent on for power generation. 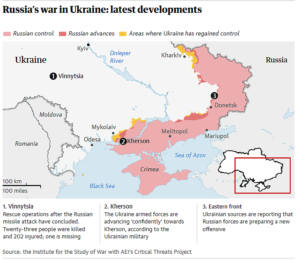 Ukraine and the Contest of Global Stamina

Russia-Ukraine war: what we know on day 130 of the invasion 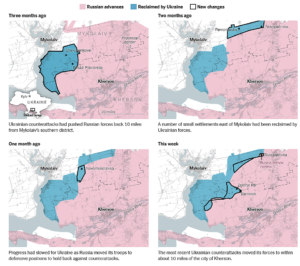 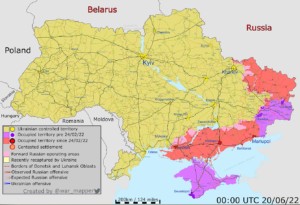 Russia’s efforts to capture Sievierodonetsk and Lysychansk – the two remaining cities under Ukrainian control in Luhansk – have turned into a bloody war of attrition, with both sides inflicting heavy casualties. Moscow, over the last two weeks, has managed to make steady gains.

A top Ukrainian government officials on Tuesday made an urgent plea for hundreds of thousands of people living in Russian-occupied parts of southern Ukraine to evacuate in advance of a potential Ukrainian counteroffensive, working to prepare the public for a bloody struggle on another front even as Russia makes steady gains in fierce and costly battles in the east.

In trying to take back territory in the south, Ukrainian officials are facing deep challenges. Russia has been dug in for months in parts of the region, complicating evacuation routes for civilians and forcing Kyiv to decide how much damage it is willing to inflict on towns and cities that — even if an eventual counteroffensive is successful — it would have to rebuild.

When Russia shifted its military campaign to focus on eastern Ukraine this spring, senior officials in the Biden administration said the next four to six weeks of fighting would determine the war’s eventual path.

That time has passed, and officials say the picture is increasingly clear: Russia is likely to end up with more territory, they said, but neither side will gain full control of the region as a depleted Russian military faces an opponent armed with increasingly sophisticated weapons.

While Russia has seized territory in the easternmost region of Luhansk, its progress has been plodding. Meanwhile, the arrival of American long-range artillery systems, and Ukrainians trained on how to use them, should help Ukraine in the battles to come, said Gen. Mark A. Milley, the chairman of the Joint Chiefs of Staff. 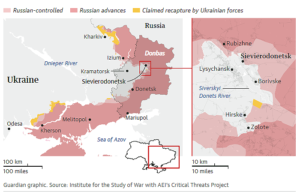 Ukraine’s deputy head of military intelligence has said Ukraine is losing against Russia on the frontlines and is now reliant almost solely on weapons from the west to keep Russia at bay.

“This is an artillery war now,” said Vadym Skibitsky, deputy head of Ukraine’s military intelligence. The frontlines were now where the future would be decided, he told the Guardian, “and we are losing in terms of artillery”.

“Everything now depends on what [the west] gives us,” said Skibitsky. “Ukraine has one artillery piece to 10 to 15 Russian artillery pieces. Our western partners have given us about 10% of what they have.”

The Ukrainian president, Volodymyr Zelenskiy, praised the UK’s support for Kyiv on Friday and reiterated his call for more weapons, as the UK defence minister, Ben Wallace, made an unannounced visit to Ukraine.

“Words turn into actions. That’s the difference between Ukraine’s relationship with Great Britain and other countries,” Zelenskiy said in a video statement. “Weapons, finance, sanctions – on these three issues, Britain shows leadership.”

Ukraine is using 5,000 to 6,000 artillery rounds a day, according to Skibitsky. “We have almost used up all of our [artillery] ammunition and are now using 155-calibre Nato standard shells,” he said of the ammunition that is fired from artillery pieces.

“Europe is also delivering lower-calibre shells but as Europe runs out, the amount is getting smaller.”

Zelenskiy said last week that between 60 and 100 Ukrainian soldiers were dying each day and a further 500 were being injured. Ukraine has kept the total number of its military losses secret.   Soldiers from Ukraine’s frontlines this week reported a similar picture. 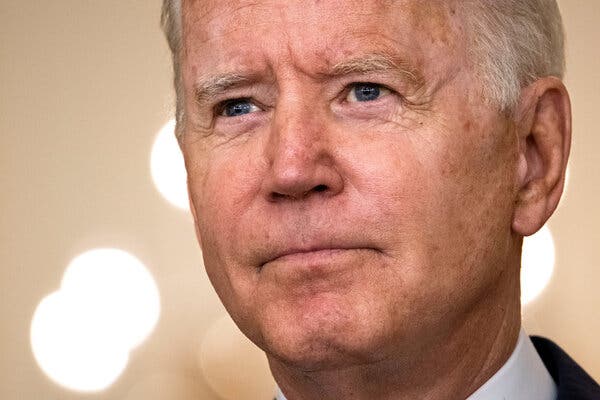 The invasion Vladimir Putin thought would last days is now in its fourth month. The Ukrainian people surprised Russia and inspired the world with their sacrifice, grit and battlefield success. The free world and many other nations, led by the United States, rallied to Ukraine’s side with unprecedented military, humanitarian and financial support.

As the war goes on, I want to be clear about the aims of the United States in these efforts.

America’s goal is straightforward: We want to see a democratic, independent, sovereign and prosperous Ukraine with the means to deter and defend itself against further aggression.

As President Volodymyr Zelensky of Ukraine has said, ultimately this war “will only definitively end through diplomacy.” Every negotiation reflects the facts on the ground. We have moved quickly to send Ukraine a significant amount of weaponry and ammunition so it can fight on the battlefield and be in the strongest possible position at the negotiating table.

That’s why I’ve decided that we will provide the Ukrainians with more advanced rocket systems and munitions that will enable them to more precisely strike key targets on the battlefield in Ukraine.

We will continue cooperating with our allies and partners on Russian sanctions, the toughest ever imposed on a major economy. We will continue providing Ukraine with advanced weaponry, including Javelin anti-tank missiles, Stinger antiaircraft missiles, powerful artillery and precision rocket systems, radars, unmanned aerial vehicles, Mi-17 helicopters and ammunition. We will also send billions more in financial assistance, as authorized by Congress. We will work with our allies and partners to address the global food crisis that Russia’s aggression is worsening. And we will help our European allies and others reduce their dependence on Russian fossil fuels, and speed our transition to a clean energy future.

We will also continue reinforcing NATO’s eastern flank with forces and capabilities from the United States and other allies. And just recently, I welcomed Finland’s and Sweden’s applications to join NATO, a move that will strengthen overall U.S. and trans-Atlantic security by adding two democratic and highly capable military partners.

We do not seek a war between NATO and Russia. As much as I disagree with Mr. Putin, and find his actions an outrage, the United States will not try to bring about his ouster in Moscow. So long as the United States or our allies are not attacked, we will not be directly engaged in this conflict, either by sending American troops to fight in Ukraine or by attacking Russian forces. We are not encouraging or enabling Ukraine to strike beyond its borders. We do not want to prolong the war just to inflict pain on Russia.

Americans will stay the course with the Ukrainian people because we understand that freedom is not free. That’s what we have always done whenever the enemies of freedom seek to bully and oppress innocent people, and it is what we are doing now. Vladimir Putin did not expect this degree of unity or the strength of our response. He was mistaken. If he expects that we will waver or fracture in the months to come, he is equally mistaken.

100 days of war in Ukraine: how the conflict has developed

Friday marks the 100th day of Vladimir Putin’s war in Ukraine. This is how the Russian president’s ‘special military operation’ evolved into a bloody war of attrition

After months of buildup and numerous denials that any invasion was planned, Vladimir Putin announced on 24 February that he had launched a “special military operation” to “demilitarise and denazify” Ukraine.

Western analysts expected a quick “shock and awe” invasion, and it seems there were indeed attempts by Russia to directly target the Ukrainian president, Volodomyr Zelenskiy, probably in order to replace his government with one more pliable to Moscow’s will.

But if Putin expected a quick, easy war with little Ukrainian or international opposition – like his invasion of Crimea in 2014 – he has been disappointed. The war has resulted in sanctions against Russia, Nato membership applications from Sweden and Finland, and rising fuel and food prices in countries thousands of miles from the conflict zone. 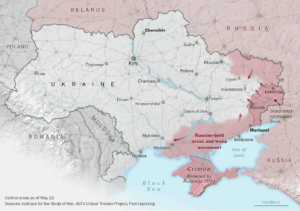 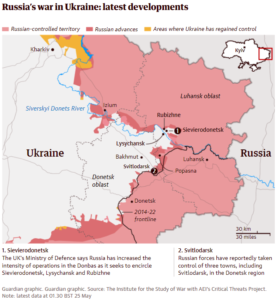 Vladimir Putin has already warned Sweden and Finland against joining NATO, a move both nations are moving toward in response to his invasion of Ukraine and the thousands of civilians his soldiers have killed there. Now Putin says Russia’s “response” to them joining NATO would come if the two Nordic nations expand their “military infrastructure.”

Blinken and Austin Visit Kyiv to Meet With Zelensky

The awful truth is dawning: Putin may win in Ukraine. The result would be catastrophe … 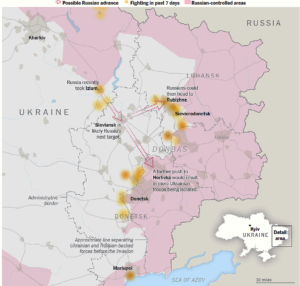