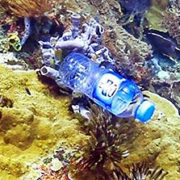 While Ocean drownings continue to be one of the leading causes of death in Hawai’i, the Pacific Ocean is also drowning… in plastic.

More than 11 billion items of plastic were found on a third of coral reefs surveyed in the Asia-Pacific region – and this figure is predicted to increase to more than 15 billion by just 2025.  Plastic contamination raises the risk of disease outbreaks on coral reefs by 20-fold, according to research..

“Plastic is one of the biggest threats to the ocean environment at the moment, I would say, apart from climate change,” said Dr Joleah Lamb of Cornell University in Ithaca, US.

“It’s sad how many pieces of plastic there are in the coral reefs …if we can start targeting those big polluters of plastic, hopefully we can start reducing the amount that is going on to these reefs.” 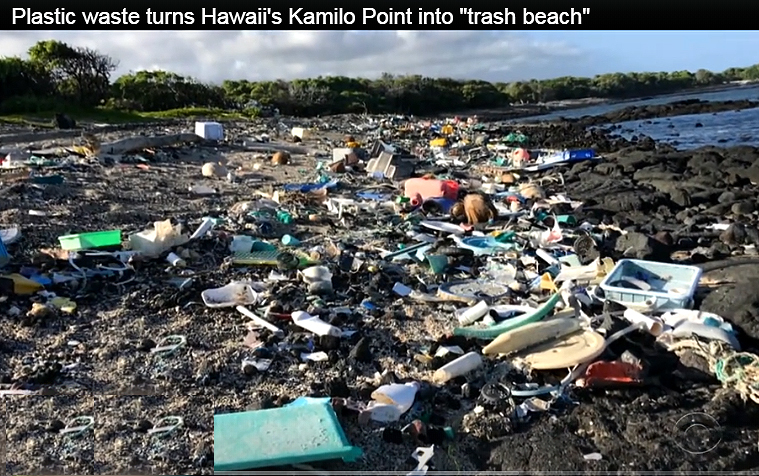 Plastic bags, bottles, plastic fishing gear and numerous other plastic containers are among the common items found floating in the ocean between Hawaii and West Coast and commonly associated with the so-called floating island or Great Garage Patch.

What is less obvious and not seen are microplastics particles, the tiny fragments left over when larger plastics break down. Most remarkably, the highest concentrations of microplastics were found between 650-1,000ft depth – four times more plastic than was found in samples at the surface. That’s on par, or higher, with quantities found at the surface of the Great Pacific Garbage Patch.

Last month a study was done in Monterey Bay, a marine sanctuary and haven for sea life including whales, otters and sharks. “We did not expect to find this much pollution at these depths,” says Kyle Van Houtan, chief scientist at the Monterey Bay Aquarium, who co-authored the new paper. The implication: microplastics could be widespread – even concentrated – in the deep ocean around the world. “This is making us realize that the problem is far more extensive than we thought, and not constrained to the surface of the ocean.”

The prevalence of ocean pollution makes it more or less a certainty that every part of every island will be impacted by consumer plastics and marine debris to one degree or another. If what you can’t see can’t harm or help you, this may explain the public perception of the deep ocean as a far-off alien world is at odds with reality and ignores how much human society can affect it. “We rely on what happens on the deep sea every day,” says Choy. “It provides a lot of commerce, substance and protein, and it makes us think about how our day-to-day habits and activities impact the deep ocean.”

Anela Choy, is a biological oceanographer, and has been noticing something odd while studying the diets of tuna and other deep-diving fish. Though they lived at average depths of 1,000 feet, their stomachs routinely contained bottle caps, trash bags, and light sticks. “It was so strange,” says Choy, who works at the Scripps Institution of Oceanography at the University of California, San Diego. “We were seeing recognizable pieces of human society.”

Microplastic pollution has been found on almost every part of the planet, but the scientists say this is the first rigorous study of microplastics distribution at varying ocean depths. Plastic was thought to stick to the surface; Choy wanted to examine everything from the surface to the ocean floor (known as the “water column”) and see how the concentration of plastic changed as animals traveled up and down. 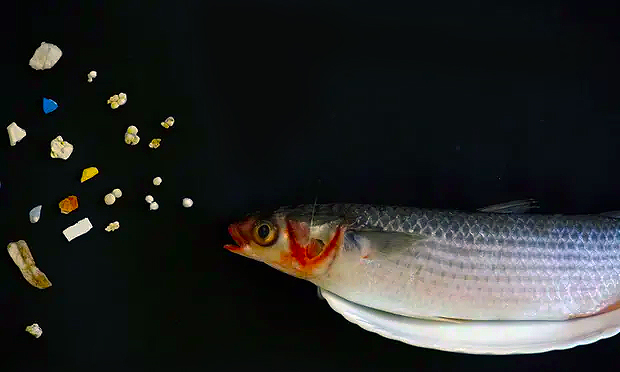 Scientists carried out their research using unmanned submarines, and sampled water at two locations and at depths ranging from five to 1,000 meters. They also sampled two marine species – pelagic red crabs and giant larvaceans (tadpole-like creatures) – both of which are filter-feeders that move from the surface to the deep on a daily migration.

Microplastics were present in all the specimens’ digestive tracts. Most of it was PET, the type found in single-use bottles and food containers. Researchers also concluded that plastic particles had been in the ocean for a long time, and that the majority came from land sources rather than fishing gear.

Small animals such as those sampled, as well as ocean water patterns, may be part of the reason that buoyant plastic is reaching such depths, explains Choy. “There can be physical mechanisms like vertical mixing, wind, waves and biological mechanisms like an animal eating plastic at the surface and pooping it out at depth.” Meanwhile, the buildup of bacteria or tiny creatures on the plastic itself changes its buoyancy and weighs it down.

As animals move up and down, they circulate materials around the ocean. “The greatest migrations in Earth are not birds to the tropics,” says Van Houtan. “The largest are the vertical migrations in the ocean, as creatures travel up and down the water column, to the deep and back. That’s why we should be concerned about these findings.”

A Precious Resource not limited to Hawai’i

As an island population, Hawaii is part of the more than 275 million people who rely on coral reefs for food, coastal protection, tourism income, and cultural importance.

Beyond plastic pollution, coral reefs face many threats, including ongoing coral bleaching caused by global warming of the oceans and changes to the water chemistry due to CO2 loading into world’s oceans.  As a result, coral polyps loose algae from their tissues, which drains them of their color, something witnessed in Hawaii’s local reef system.

Coral may recover when climate-driven fluctuations heat and then cool water temperatures, but so far  coral recovery for some of West Hawaii’s reef system since the last major bleaching event of 2015 has been sporadic or too selective to indicate a wide scale recovery – which would be reversed within short time period of time with further warming which has already documented this summer. The trend towards warmer and warmer water and air temperatures is not encouraging for coral recovery  in what is normally a process measured in decades.

The waters off West Hawaii are no exception and are not exempt from dangerous pollutants, but plastics pose a much greater threat to the marine food chain.  Hawaii state officials, boat captains and residents have all noticed an apparent uptick in marine plastics and debris ranging from derelict fishing and cargo nets to consumer plastics all in West Hawaii waters.

Long-time commercial fisherman, claim that plastics and other trash are more or less constant 20-40 miles offshore. Where he’s noticed the increase in debris is at 1,000 fathoms, where nets are the primary problem, and what local fishermen referred to as the Ono Lane, located roughly 40-50 fathoms out from the shoreline.

Carried by the currents, the problematic presence of excess debris both in the water and on the shoreline has plagued Hawaii Island’s entire leeward coast.

In the study, published in the journal Science, international researchers surveyed more than 150 reefs from four countries in the Asia-Pacific region between 2011 and 2014. 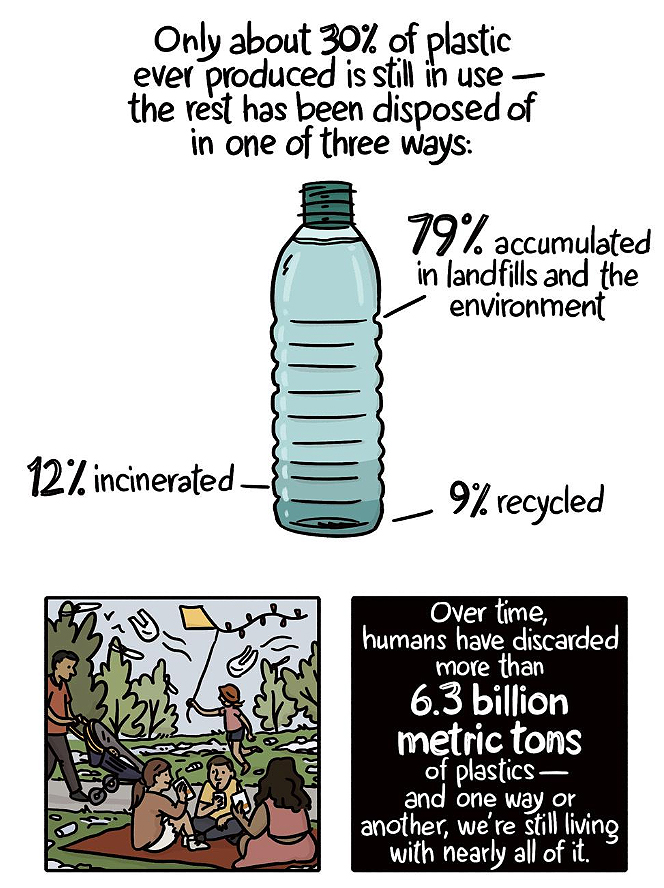 Plastic was found on one-third of the coral reefs surveyed. Reefs near Indonesia were loaded with most plastic, while Australian reefs showed the lowest concentration. Thailand and Myanmar were in the middle.

Scientists have found in their studies big rice sacks or draping plastic bags smothering coral and especially corals with a lot of complexity like branches and finger-like corals that are eight times more likely to be entangled in these types of plastics. It’s thought that plastic advances diseases that prey on the marine invertebrates that enable coral reefs to flourish. Branching or finger-like forms of corals are most likely to get entangled in plastic debris.  These are important habitats for fish and fisheries, the scientists say.

In the case of diseases, organisms attack coral, leading to likely death. Previous research has found that plastic debris can stress coral through blocking out light and oxygen, thereby giving pathogens a chance to take hold.

Based on projections of plastic waste going into the ocean, the researchers suggest that the number of plastic items snagged on Asia-Pacific corals may increase from 11.1 billion to 15.7 billion plastic items by 2025.

More than three-quarters of this plastic is thought to originate on land, and so, the ocean is full of fish, and more recently in course of human history… garbage.

What to do with all that Plastic, look to India…

Sustainability is Mauō
Scroll to top