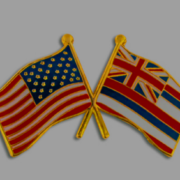 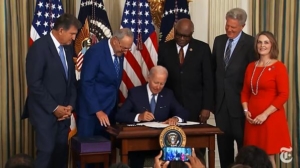 With President Biden’s signature, the $437 billion “Inflation Reduction Act,” became law today. The bill focuses on healthcare reforms, energy and climate initiatives, and represents  a smaller version of the president’s “Build Back Better” plan, a centerpiece of his legislative agenda since taking office.

The sweeping legislation is also expected to reduce the deficit by a tax baseline paid targeting corporations which previously paid zero income taxes through legal loopholes in the code – taxes which were slashed by Republicans during the Trump administration. Equally ground breaking, the bill finally allows Medicare to negotiate lower drug prices, a common government practice in Canada and most EU countries.

“This is a historic moment,” Biden proclaimed at the signing ceremony. “Democrats sided with the American people and every single Republican in Congress sided with the special interests.”

The final bill language includes clean electricity incentives that are comparable in size to those in the previous House version, but scales back spending in almost every other category, from transportation to climate resilience.  The one major exception was manufacturing: Compared with previous versions of the bill, the final legislation marks a significant increase in grants, loans and tax credits to manufacture clean energy technology domestically.

Democrats have said the new bill’s deficit reduction, as well as the provisions aimed at lowering energy and prescription drug costs, will help address the rapid inflation over the past year. Most economists agree with this assessment, the bill will likely reduce price pressures, however, the overall effect is likely to be modest in the long term.

What’s in the Inflation Reduction Act

Figures are in billions and over 10 years.

*These are estimates and subject to minor changes to the drug price provisions in exact cost and savings estimates. Savings from the drug price negotiation policy may end up being lower, and the savings from limits on drug price increases are unofficial estimates based on an analysis by Don Schneider, a former chief economist of the House Ways and Means Committee.