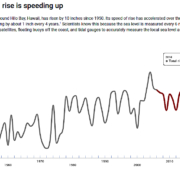 A famous 1960’s song opens with “There’s something happening here, but what it is ain’t exactly clear“… A 4,000 page draft report by the United Nations Intergovernmental Panel on Climate Change (IPCC) makes whatever isn’t clear now perfectly clear in the most recent scientific Climate findings and projections on Earthbound warming impacts.

The in-depth report concludes with these three fundamental warnings in which the public, politicians, and business should heed:

Tipping points and feedback loops, are perhaps best exemplified by ever increasing melting of the Artic permafrost, which in turn releases methane gas trapped in the ice and then into the atmosphere. Methane releases further amplify the greenhouse gas effect, pushing temperatures even higher. As a result of the melting of the polar ice caps and loss of sea ice, the earth absorbs far more of the sun’s ultraviolet radiation and heat, which further contributes to ice melt.

The report warns of “progressively serious, centuries’ long and, in some cases, irreversible consequences.” The report also said that the millions of people who live along coastlines almost everywhere around the world could be battered by multiple climate calamities at once: drought, heatwaves, cyclones, wildfires and flooding.

Nothing in the IPCC report should be a surprise, as all the information comes from the scientific literature. But put together, the stark message is that increasingly severe heatwaves, fires, floods and droughts are coming our way with dire global impacts, and Hawaii’s remoteness will not protect us from the consequences of humankind’s unabated burning of fossil fuels.

On top of this are the irreversible changes now underway. These tipping points, such as where high temperatures and droughts means the world’s forests (temperate and rainforests) may not survive. Altogether, Climate-induced tipping points will be like toppling dominoes, with social, environmental and economic damages impacting food supplies, transportation, energy, industry and social infrastructures within the next few decades – impacts which are already well underway and accelerating.

Climate change is already taking a toll on the global economy, and forecasts predict worse is to come by mid-century (2050).

In a worst-case scenario, if Earth’s temperature rises four degrees Celsius above pre-industrial levels, global GDP could decline 10 to 23 percent compared to a world without warming

In the Asia-Pacific region, rising sea levels are threatening to cause havoc across Asia-Pacific, from Bangladesh to China to Australia. The IPCC projects sea level rise up to 1.1 meters by 2100.

AND HAWAII; sea-level rise is accelerating

Sea level rise is a statewide problem with the entire Hawaiian chain of islands impacted.  The sea level off Hawaii’s various coastlines is up to 10 inches higher than it was in 1950.

For MAUI, sea level rise impacts are mostly due to ice melting into the ocean and is causing major issues.  With sea-level rise, an increase in wave plus tide-driven flooding has led to worsening coastal erosion in the Honokōwai area of West Maui in recent years. 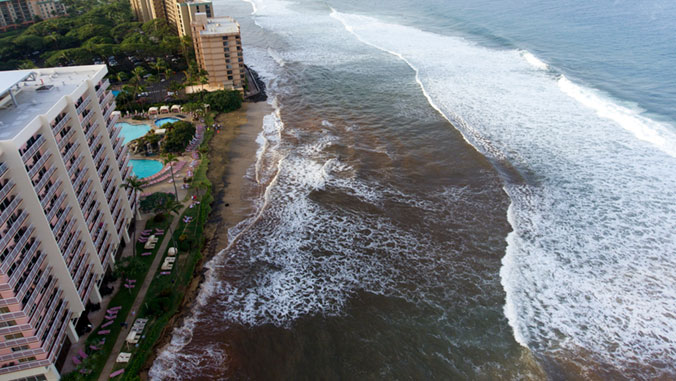 For HAWAII ISLAND, the sea level around Hilo Bay, Hawaii, has risen by 10 inches since 1950. Its speed of rise has accelerated over the last ten years and it’s now rising by about 1 inch every 4 years. Scientists know this because the sea level is measured every 6 minutes using equipment like satellites, floating buoys off the coast, and tidal gauges to accurately measure the local sea level as it accelerates and changes. 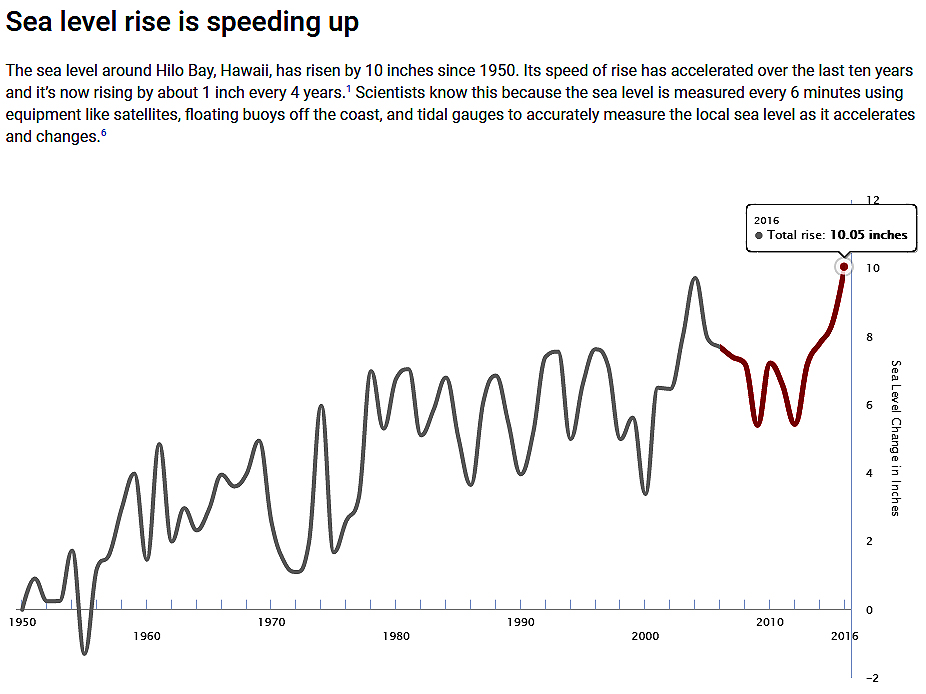 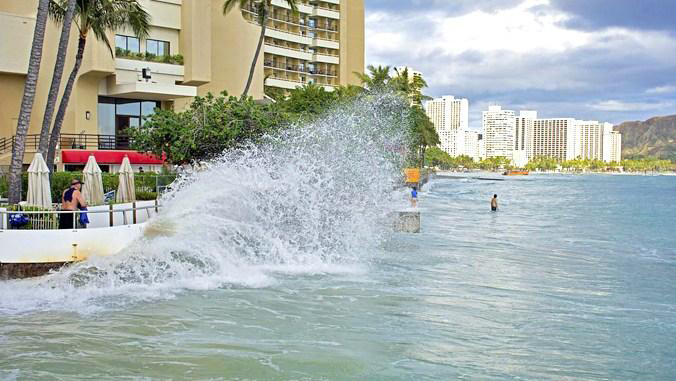 Weather intensity swings in Hawaii are increasingly impacting the islands.

Hawaii may be graced with tropical forests, making parts of the islands some of the wettest places on the planet, but it is also increasingly vulnerable to wildfires. Heavy rains encourage unfettered growth of invasive species, including guinea grass, and dry, hot summers make them highly flammable.

Similar to the American West, where dozens of large blazes have raged in recent weeks and fire seasons have grown worse over the years because of extreme weather patterns and climate change, about two-thirds of Hawaii faces unusually dry conditions this summer.

Some of the recent fires, especially on the Big Island and the island of Maui, ravaged areas spanning about 10,000 acres. From 2018 through last year, at least 75,107 acres across the islands have been lost to wildfires, by far the most devastating stretch in a decade and a half.

While the fires showcase several challenges that Hawaii shares with states in the West, including the spread of highly flammable invasive grasses, authorities in Hawaii also cite other factors that make Hawaii unique. Those include big shifts in rainfall patterns over the archipelago and tourism’s eclipse of large-scale farming in Hawaii’s economy, allowing nonnative plants to overtake idled sugar cane and pineapple plantations.

Hawaii can be complicated because each island is affected differently by sea level rise and flooding, but the impact is felt by all islands collectively.

The state is planning over $6 billion in sea level rise solutions, which include port and canal improvements, dredging, and restoration of wetland habitats.

Extreme flooding events in some U.S. coastal areas could double every five years if sea levels continue to rise as expected, according to a study published in Scientific Reports.

Today’s “once-in-a-lifetime” extreme water levels— are currently occurring every decade— and are projected to be exceeded by daily event along most of the U.S. coastline before the end of the 21st century.

The return on investment in converting to a clean energy economy, and as a result, capping global warming at 1.5 degrees Celsius rather than two degrees would increase per capita GDP five percent across the developing world and potentially more so for developed economies by mid-century. UN estimates project up to 20 percent increase in global GDP by 2100. Even more importantly, a rapid transition to a clean energy will help ensure a prosperous and healthy future for Hawaii and the planet.

HB 243 requires state agencies to identify facilities that are susceptible to sea level rise and flooding.   The agencies also will need to send an annual report to the governor. The state is also required to prepare mitigation plans for these facilities.

SB 474, requires anyone selling a home to disclose if the property lies in a sea level rise exposure area.  According to a 2017 report from the National Oceanic and Atmospheric Administration, the global mean sea level will rise 3.2 feet by 2100. In a more extreme scenario, that level can be reached by 2060.

HB424 – Requires all state and county entities, when renting a vehicle on behalf of a state employee in the discharge of official government business, to rent electric or hybrid vehicles.

HB1142 – Allocates 3 cents of the barrel tax to fund the installation and statewide build out of an EV infrastructure; charging systems, along with enforcement of 297-71 HRS – penalties for failure to comply with the requirement to install and maintain charging stations; while at the same time authorizing penalties for improper parking in an EV charging stall.