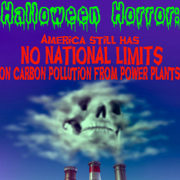 The PUC decision process was also a case in point in a public process leading to the PUC’s failure to measure the benefits and costs of renewable energy power plant replacements with the consequences to the public and Hawaii’s environment.

During the opening remarks before he Supreme Court,  Associate Justice Wilson supports Solicitor General Wadsworth remarks in his statement that “…the PUC was asked to consider a biomass project, wasn`t given a range of alternatives” …  Justice Wilson must assume the PUC is unaware of renewable energy alternatives to Hu Honua’s biomass proposal, or clean energy options currently available, e.g., utility scale clean energy wind,  solar, and storage. 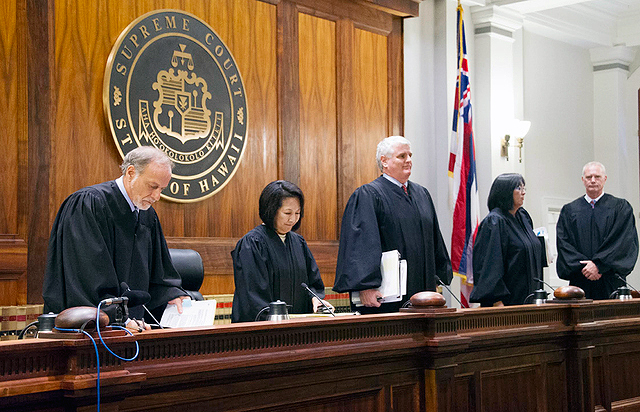 Does Hawaii’s PUC have the responsibility and authority to fully consider the implications of its power plant decisions, and should not greenhouse emissions, social impacts, and other pollution factors merit equal consideration in such plant approval decisions by Hawaii’s PUC?

Representing the state’s PUC before Hawai’i supreme court justices this week, Solicitor General Wadsworth said he doesn’t think so. Wadsworth told the court “…there aren’t any other options to compete with it (Hu Honua biomass plant)…”.  Failing to qualify his statement, Wadsworth did not mention recent HECO-HELCO plans that call for the development of two new low-cost and emissions-free solar-storage utility grade generating facilities scheduled for the Big Island, totally 60 megawatts.

Wadsworth further asserts that wind and solar are unreliable and not dispatchable (on-demand) without batteries, adding that such options he asserts …”explodes the price”.  His statement to the court begs the question, relative to what?

The PUC decision favoring the Hu Honua application didn’t fully consider the social and economic supply-chain operating costs associated with Hu Honua’s tree-burning power plant, nor the 24×7 supply-chain that will no doubt prove to be very costly to the public and the environment.  A supply chain liability totally unnecessary with alternative solar and wind power plant options.

The PUC decision failed to fully consider the cost to ratepayer and taxpayer subsidies on which Hu Honoa business case has been sold to the public and the commission. But this decision did not occurred in a vacuum.

1-      Hawai’i County’s planning department was complicit in its absence of due diligence and cheer-leading for a project which will have fundamental impacts on County roads from Hu Honua’s tree-fed supply-chain of trucks on which the plant depends. Life of the Land also raises the question of Hu Honua’s plans for importing cut trees to further feed the plant and the fossil fueled supply-chain that will deliver those trees.

2-      Hawaii’s well-intended state legislature failed in its outdated and misguided RPS law, which continues to allow Hu Honua and other polluting biomass alternatives to be considered on an equal footing with emissions-free clean energy options.

3-      DLNR turned a blind eye to the wanton destruction off Hawaii’s forests as a fuel source for the Hu Honua plant.

4-      Department of Health (Clean Air Branch) failed in any meaningful participation or regulatory due diligence in the Hu Honua decision.

Hu Honua fails any reasonable economic, social, and environmental test. It also fails as a clean energy replacement to fossil fuels. It does NOT benefit the environmental goals on which Hawaii’s push to fossil fuel-free power generation objectives are based.  Equally important, its fails the Hawai’i Island community which HELCO serves.

The process which allowed Hu Honua to go forward demonstrates how our government stakeholders have failed to represent the public’s interests, and if and when the court allows Hu Honua to proceed beyond this last pubic objection, the public conclusion will be why was this plant allowed to go forward, how could it possibly be a benefit to the public and the State of Hawaii’s intent to transition to a clean energy by 2045?

PART II – Hu Honua power, but at what cost?

The Hawaii Tribune reported last year “...If Hu Honua Bioenergy’s long-delayed biomass power plant were to go online by the end of 2018, Hawaii Electric Light Company’s ratepayers would see increases in their electricity bills, according to an analysis HELCO filed Wednesday with the state Public Utilities Commission of a proposed power purchase agreement”.

Cost efficient, competitive, and clean energy power alternatives to the Hu Honua’s tree-burning power plant for the big island were obvious to everyone, but the vested stakeholders: HELCO and Hu Honua.  Solar and wind options, without or without batteries or pumped storage abound for the Big Island. These clean energy power production alternatives carry none of the pollution baggage and public costs associated with the operation of the Hu Honua Bioenergy plant.

Hu Honua claims could be selling electricity at 8 cents per kilowatt-hour, and can compete against solar at 9 cents or solar plus storage at 11 cents, even though the total payments to Hu Honua would average over 20 cents per kWh with public-funded Agricultural subsidies, and this estimate only represents the basic power production costs, none of the downstream environmental costs (air, water, climate, infrastructure, and marine costs) paid for by the public and the local environment have been factored.

Hu Honua proposes to use underground injection wells to send the heat through a coastal aquifer and then into the ocean seabed. The discharge of pollutants, including heat, is regulated at the state and federal level by the National Pollutant Discharge Elimination System (NPDES).  With little to no government oversight, permits are granted and valid for five years.

Who speaks for the Hawai’i Island’s residents, marine environment, and aina

To date, motions for a contested case proceeding have been filed by four entities: Pepe‘ekeo Shoreline Fishing Committee (PSFC) which is a committee of the Pepe‘ekeo Community Association, Life of the Land, Sierra Club Moku Loa Group, and Claudia Rohr.

The Pepe‘ekeo  Shoreline Fishing Committee “oppose the injection of over two dozen hazardous chemicals into injection wells, along with wastewater to be discharged. The manufacturer’s labels for each of these chemicals is listed in Hu Honua’s application to build the UIC wells. Most of them are listed as ʻhazardous,ʻ many of them strictly warn ʻdo not expose to groundwater,ʻ and one of them indicates that it is seriously harmful to aquatic life.

Claudia Rohr noted that “Hu Honua’s storm water drainage system uses state-owned land designated ʻconservationʻ by the Land Use Commission (LUC) for Outfalls 001 and 004, which falls into two of the categories of action listed in HRS section 343-5(a)(1) and (2), that are not minor activities exempt under HRS section 343-6 or HAR section 11-200-8. Hu Honua’s use of state-owned land designated conservation by the LUC requires that Hu Honua completes at the minimum an environmental assessment before decision-making under HEPA.”

Make no mistake, power plant ash can be toxic, and that degree of toxicity being dependent on the fuel source burned to produce electricity.  Rohr went on to point out… “Ash is not a listed pollutant and Hu Honua’s ash handling procedures and BMPs for ash are not integrated into the draft permit. Inevitably some ash will end up  in stormwater washing ash laden surfaces and flowing through the facility– where ash is loaded into containers under the ash silo, the outside of ash containers, the outside of trucks, on roads, and in the ash container storage area off Sugar Mill Road (where coal was formerly stored).”

“Furthermore, the contaminated soil from the old settling ponds that was never re-mediated is spread out in the area where logs will be transferred to and dropped at the chipper house, causing environmental concerns of health risks from exposure to polluted stormwater.”

The Sierra Club Moku Loa Group represents over 1000 members on the island of Hawaii, and has noted that their members regularly use the Hamakua coastline, and particularly the Pepeekeo cliffs and shoreline, with four miles of public access trails along the coastline for recreation, scientific pursuit to understand biologic and geologic events over time, and for enjoying and gathering of near-shore resources. “…Several of our members live in the Pepeekeo community affected by the Hu Honua proposed bioenergy facility.”

Sierra Club’s concerns can be summed up in just how can the County and the State reconcile the advancement of this project with the further erosion and landslides accelerated by the force of 21.6 million gallons of power plant water discharges being injected in wells located less than 100 feet from the edge of our already unstable cliffs near the Hu Honua plant site’s operation.  Their concerns are with Hu Honua’s contribution to the area’s geologically unstable cliffs, already impacted from stormwater sheeting over the area in recent months, and the corresponding cliff face softened during Hurricane Lane that produced a significant landslide.  Since the landslide on-going cliff erosion remains problem with soil continuing to fall into the ocean, damaging coral reefs in the area and the overall marine ecosystem and serving as a source for mortality in area fisheries.

The Hawai`i Department of Health has scheduled a public hearing for the Hu Honua water permit on Wednesday, November 14, 2018, at the ‘Imiloa Astronomy Center of Hawai‘i, Moanahoku Hall, 600 Imiloa Place, Hilo.  The two-hour “public information” meeting will start at 10:00 am. Both verbal and written testimony will be received at the public hearing starting at 1:00 pm, and prior to the meeting, comments may be emailed by the close of the business day to cleanwaterbranch@doh.hawaii.gov.

Hawai’i Island Energy At A Crossroads

One of Our Islands Just Disappeared
Scroll to top