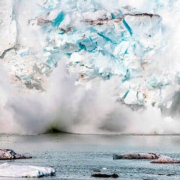 An enormous iceberg, a little bigger than the state of Rhode Island, has broken off of Antarctica.

The iceberg broke off the western side of the Ronne Ice Shelf in Antarctica’s Weddell Sea, as observed by the European Space Agency (ESA). 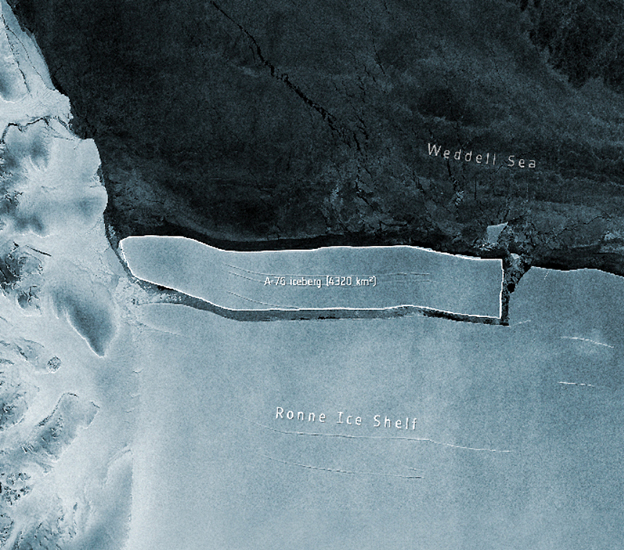 The finger-shaped chunk of ice, which is roughly 105 miles (170 kilometers) long and 15 miles (25 kilometers) wide, was spotted by satellites as it calved from the western side of Antarctica’s Ronne Ice Shelf, according to the European Space Agency. The berg is now floating freely on the Weddell Sea, a large bay in the western Antarctic.

Almost 90% of the glacial area in the world is in Antarctica, which is crucial to our climate.

The bright white spots act like a protective cover over the Earth and our oceans, reflecting excess heat back into space to keep the planet cooler. But because of our greenhouse gas pollution, our glaciers are rapidly melting, which only further speeds up dangerous warming of our earth.

Our planet’s ecosystems are intricately intertwined, so when polar ice melts, it has far-reaching consequences.

For instance, rapid melting of the polar ice caps causes less heat to be repelled back into space and creates a feed-back loop resulting in warmer poles and a warmer planet. That in turn not only creates an even greater loss of sea ice that animals like polar bears and walruses rely on for their habitat, but the entire ocean ecosystem is impacted.

The polar regions and current climate-induced meltdown, the result of accelerated global warming, puts the whole planet at greater risk of the dangers we are already seeing – fires, storm surges, drought and other destabilizing forces that put our island communities at risk.

The wild waters of the Southern Ocean surrounding Antarctica are one of the planet’s biggest carbon stores.

The ocean absorbs around 12% of all carbon dioxide generated by humans each year, but despite its huge importance in regulating the Earth’s climate, it has barely been studied by science.

Melting glaciers change ocean currents by introducing cold water to warmer oceans. This changes the habitats of countless animals and has been linked to the collapse of fisheries.

We’re becoming used to constant news showing greater disasters around the world, rising temperatures in every region, and record-breaking glacial collapse.  Scientists have been telling us for years that we need to act now in order to avoid devastating consequences now underway.

California is at the edge of another protracted drought, just a few years after one of the worst dry spells in state history left poor and rural communities without well water, triggered major water restrictions in cities, forced farmers to idle their fields, killed millions of trees, and fueled devastating megafires.

– Food supply is the next climate victim

Last week, the unofficial end of California’s wet season, officials announced that the accumulation of snow in the Sierra Nevada mountains and the Cascades was about 40% below average levels. The state doesn’t have enough snow and rain banked to replenish its groundwater supplies, feed its rivers and streams or fill depleted reservoirs.

Just four years since the state’s last drought emergency, experts and advocates say the state isn’t ready to cope with what could be months and possibly years of drought to come. Heading into the summer, battles are heating up between cities, farms and environmentalists over how scarce supplies are rationed.

Many of the state’s reservoirs are at extremely low capacity and levels are expected to drop further in the coming months. Already, the state’s 154 major reservoirs are collectively at 71% of where they typically are on average. Federal climate analysts with the National Integrated Drought Information System called the outlook for California’s reservoir levels recovery “grim” in their most recent report.

California is America’s primary produce supplier and diversified agricultural exporter to Hawaii and other states.

California’s drought will result in supply shortages and higher food costs for consumers.

A third of global food production will be at risk by the end of the century if greenhouse gas emissions continue to rise at their current rate, new research suggests.

Many of the world’s most important food-growing areas will see temperatures increase and rainfall patterns alter drastically if temperatures rise by about 3.7C, the forecast increase if emissions stay high.

Researchers at Aalto University in Finland have calculated that about 95% of current crop production takes place in areas they define as “safe climatic space”, or conditions where temperature, rainfall and aridity fall within certain bounds.

If temperatures were to rise by 3.7C or thereabouts by the century’s end, that safe area would shrink drastically, mostly affecting south and south-eastern Asia and Africa’s Sudano-Sahelian zone.

– Onward to a Hotter World – 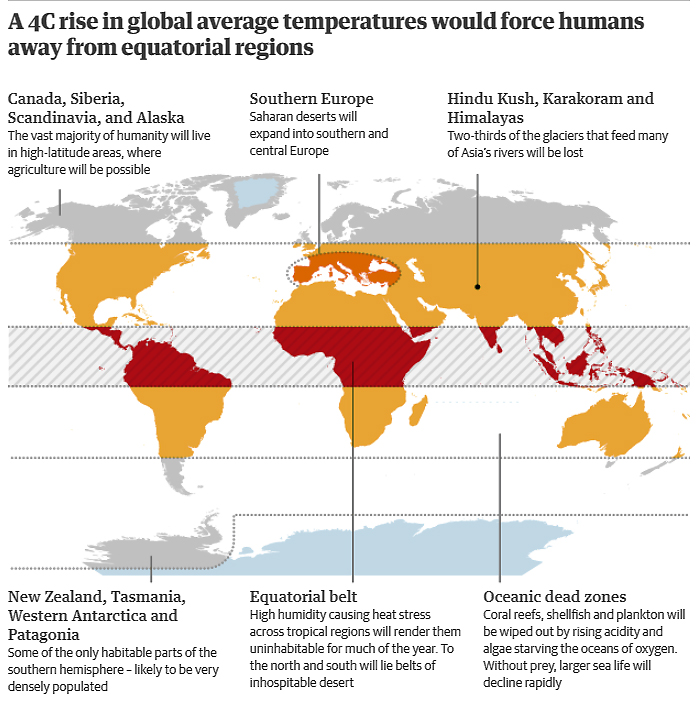 Over the past decade, scientists have been able to produce a far more nuanced picture of how temperature rise affects the complexities of cloud cover and atmospheric and oceanic circulation patterns and ecology.

Confusing Economic Signals; what does it mean for Hawaii